BY IAN PATTERSON
January 27, 2016
Sign in to view read count 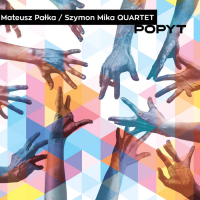 The title of the debut album from the Polish quartet co-led by Mateusz Pałka and Szymon Mika translates as "demand," reflecting the group's belief that greater melodic expression is what the modern jazz fan pines for. It follows that the six originals—and a cover of Sonny Rollins' "Airegin"—are above all tuneful, with the extended soloing, that is one of the album's strengths, following sharply defined melodic contours. Stylistically, the music is subtly diverse from one track to another and the shifting quartet dynamics and strong musicianship make for a rewarding listening experience.

The mid-tempo "Opening"—one of two tracks penned by Mika—is indicative of the unhurried and elegant yet always engaging approach of the quartet, and features solos from the leaders, double bassist Alan Wykpisz and drummer Grzegorz Maslowski. Mika gained international recognition after winning the inaugural Jarek Smietana International Guitar Competition in 2015 and on his other composition, the breezy "Zakaz Smutku" it's easy to see how a judging panel that included John Abercrombie, Mike Stern and Ed Cherry were persuaded by his lyrical improvisational narratives.

Palka, who also impresses as a refined soloist, contributes four contemporary sounding compositions, of which the slow-burning, powerfully emotive "This is Not the Time for a Barber" is arguably the pick of the bunch. Pianist and guitarist join in slow-shuffle tandem on the lovely, brushes-led ballad "Nóż w Maśle," both stretching out in turn with quietly compelling authority. The straight-ahead, up-tempo rendition of Rollins' "Airegin" almost inevitably recalls the Wes Montgomery/Tommy Flanagan version from 1960, with Wykpisz playing Percy Heath to Maslowski's Albert 'Tootie' Heath; within the wider context of the quartet's impressive originals, this cleanly articulated nod to the tradition adds little to the quartet's personal identity, coming across as a lively first-set closer.

Palka strikes a fine balance between form and freedom on the episodic "Popyt no monke," which commands the attention for the full fourteen minutes. The pianist's meandering right hand leads the quartet from bluesy stroll into increasingly denser territory bordering on the ecstatic before exiting on the back of a vamp-buoyed drum feature. By way of contrast, Palka's classically-infused minimalism colors "Spring is Coming." Mika sits out this ruminative, largely pulseless number where spare bass notes alternate with crying arco over rumbling mallets and washing cymbals. It's the pianist's impressionist, gently lyrical caress, however, that really stands out on this delicate closing statement.