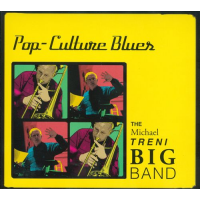 The blues, as it turns out, has many shades; an enduring art form that has been an integral part of the language of jazz since its beginning (if not before). Some aspects of the blues are readily perceived, others not so much. "The common thread," Michael Treni writes in his astute liner notes to Pop-Culture Blues, the fifth album as leader of his own big band, "is that the blues is most frequently found as a 12-bar form made up of Dominant 7th chords with the IV chord used in the 5th measure." If you follow that, you'll most likely understand and appreciate Treni's purpose in writing a ten-part blues-based suite that "presents the development of the blues within the jazz idiom by [using] the changing compositional styles prevalent from the late 1950s to today." If you don't, all you need know is that the music presented here, whatever its origin or label, is sublime.

Treni launches his colorful odyssey with "One for Duke," inspired, of course, by the one and only Duke Ellington, and continues onward with assorted themes epitomizing the spirit of Count Basie, Charles Mingus, Lee Morgan and other Blue Note artists of the '60s, Gerry Mulligan and the "cool school," John Coltrane / Oliver Nelson, Herbie Hancock / Wayne Shorter, the Brecker brothers and McCoy Tyner. The last movement, "Pop-Culture Blues," Treni writes, "incorporates a variety of stylistic elements that is both representative of contemporary practice yet also pays tribute to the past." In his impressive commentary, Treni provides a cogent synopsis of each tune and its relation to the musicians on whose style it is based.

This is the blues in all its multifaceted glory, marvelously performed by twenty-one seasoned musicians to whom the genre seems second nature. What is missing (but by no means missed) are any vocal representations of the blues. There are no twanging guitars or throaty homilies to "muddy the waters" (pun intended), only the invigorating sounds of a world-class big band that knows its way around the blues. Even though this is a suite, its prismatic design ensures that each component can stand securely on its own. And if you're thinking the blues doesn't swing, the closing "Pop-Culture Blues" should drive that notion right out of your head.