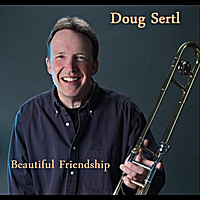 Here's an interesting concept: an organ trio with trombone (or vice versa), led by Canadian trombonist Doug Sertl with Rick Montalbano at the Hammond B3, Peter Bernstein on guitar and another Canadian, Terry Clarke, in the drum chair. The album was recorded before the millennium and marked time on a shelf until it was released in 2013, an occasion that was, in Sertl's words, "long overdue." Surely, Beautiful Friendship has as much or more to offer than quite a few albums that have seen the light of day since it was completed and shunted aside. Sertl's quartet is exemplary, and the bright-hued session should please fans of both organ trios and trombone.

The choice of material is tried and true, encompassing five standards, Dizzy Gillespie's bop classic "Groovin' High" and Mercer Ellington's "Things Ain't What They Used to Be." Even though Sertl is in command he is never imperious, and everyone is given more than a few chances to shine. Like Sertl, Bernstein and Montalbano are resourceful soloists, while Clarke, who knows when to take charge or lay back, is the ideal timekeeper for a group of this size and bearing. He uses sticks to make his more explicit points, brushes whenever the mood is more sedate.

Sertl and the others fashion a bright, amiable groove on "Beautiful Friendship" and maintain it through "I'm Getting Sentimental Over You" and "I Hear a Rhapsody" before slowing the tempo on "Nancy (With the Laughing Face)." On "Groovin' High," Montalbano and Bernstein establish the theme while Sertl superimposes the melody on which it based, "Whispering." Hoagy Carmichael / Ned Washington's "The Nearness of You," best remembered as a sensuous ballad sung by Sarah Vaughan, among others, is taken at a slightly brisker tempo, which leads to the shuffling finale, "Things Ain't What They Used to Be."

Even though its playing time is under fifty minutes, Beautful Friendship can be endorsed for its many engaging moments, and for the musical artistry of Sertl, Bernstein, Montalbano and Clark, who together comprise a superior foursome whose impressive voices are worth hearing.

Beautiful Friendship: I’m Getting Sentimental Over You; I Hear a Rhapsody; Nancy (With the Laughing Face); Groovin’ High; The Nearness of You; Things Ain’t What They Used to Be.