BY JOHN SHARPE
February 5, 2018
Sign in to view read count 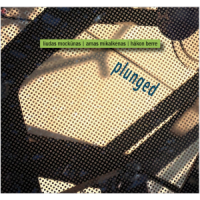 Recorded at the 2014 Vilnius Jazz Festival by a band comprising two Lithuanians and a Norwegian, which was one of the standouts of the 2017 Vilnius Mama Jazz Festival, Plunged proves an unexpected delight. Of the three participants, reedman Liudas Mockūnas is likely best known, having recorded with bassist Barry Guy, drummer William Hooker and saxophonist Mats Gustafsson for the NoBusiness label, although drummer Håkon Berre performs on disc with German saxophonist Peter Brötzmann and Portuguese trumpeter Susana Santos Silva among others. Completing the trio, Mockūnas' countryman pianist Arnas Mikalkėnas may be less well known but confirms himself as equally talented.

While the individual parts are top notch, it's how they work together which demands attention. They combine on a program of seven original compositions, five by the pianist and the remaining two by Mockūnas. The charts mix classically informed precision with jazz excitement and unpredictability. The braided clarinet and piano interplay of "Study No.1" provides a wonderfully graceful chamber infused opening. But by "Study No.2" some of the more expressionistic elements are beginning to appear as Mockūnas' soprano saxophone floats ever upwards over rippling piano and pattering drums in a circular breathed spiral, where the notes fray at the edges until reaching a banshee wail.

In its alternation between elegance and discord "Study No.3" constitutes one of the highlights. Mikalkenas displays fine two handed control exploring his thickly coiled bass register over weighty chords. When Mockūnas plays a structural role by creating a framework of reiterated blurts on bass saxophone, the piano attack becomes more wide ranging, with initially the right hand flailing then both. That's followed by a splintered exchange between the reedman and the drummer. The piece ends with Berre alone in a solo which avoids bombast in favor of tappy innovative textures which leads into the spare tattoo of the almost Braxtonian "Stress."

Later on "Study No.5" the interchange between Mockūnas and Mikalkenas also brings to mind Anthony Braxton, this time in his duets with pianist Muhal Richard Abrams. The pianist also gets to stretch out on "Study No.4," but otherwise he does the heavy lifting, focusing on vamps, unisons and shaping the overall design, seeming content to leave the aerobatics to Mockūnas.

On his own expansive "Pels," the saxophonist recalls first Mats Gustafsson with his sudden tenor plosives and wild skronk, and then Sonny Rollins with his flowing lines as they work up to a sweepingly majestic finale. But ultimately he remains his own man, courtesy of both his skills as an improviser and his classical training. And those are traits which illuminate the entire date.