BY ROGER FARBEY
February 5, 2018
Sign in to view read count 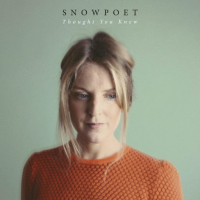 Thought You Knew follows in the wake of Laura Kinsella's critically acclaimed 2014 recording with Blue Eyed Hawk, the highly imaginative Under The Moon (Edition Records) and Snowpoet's eponymous debut album released in 2016 on Two Rivers Records. Kinsella's mellifluous voice is like a cross between the late Sandy Denny and the Cocteau Twins' Liz Fraser, but this amalgam makes for a truly unique vocal presence. Whilst this is nominally an ensemble affair, Kinsella, who penned eight of the ten songs presented here, undoubtedly leads the group in conjunction with her multi-instrumentalist colleague Chris Hyson who also skilfully produced the album.

On "The Therapist" Kinsella gently weaves her voice around Nick Costley-White's chiming acoustic guitar and her own exquisite backing vocals. "Dear Someone," sounding like an old fashioned traditional song, is a short and charming acapella number with Kinsella supplying her own multi-tracked harmonies. "Love Again," the longest track at seven minutes, encapsulates all that is good about this album, a perfect balance of instruments juxtaposed with angelic vocals. The quirky "It's Already Better Than Ok," mainly spoken by Kinsella in her dulcet Irish lilt, essentially amounts to an irresistible stream of consciousness poem.

Thought You Knew offers a delicately haunting collection of songs that seamlessly straddle the boundaries of folk, jazz and popular music and are all infused with, as the name suggests, a subtle poetic delivery. At just under thirty five minutes this is a comparatively short album by today's standards, but with Snowpoet it's very much a case of quality over quantity and consequently leaves the listener thirsting for more.

The Therapist; Under The Tree; Water Baby; Love Again; Dear Someone; Snow; Pixel; Two Of Cups; It’s Already Better Than Ok; Another Step.