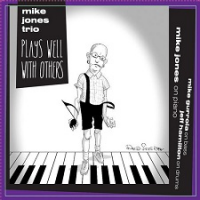 Pianist Mike Jones not only Plays Well with Others, he plays well—period. Using a sharp, two-fisted style that hearkens back to Dave McKenna, Dick Hyman and even Earl Hines, undergirded by a buoyant melodicism worthy of Barry Harris, Tommy Flanagan or his namesake Hank Jones, it's clear there's not much that Jones can't accomplish musically with keyboard in hand. And when the "others" he is playing with are bassist Mike Gurrola and drummer Jeff Hamilton, so much the better.

Gurrola represents a step up from Jones' "regular" bassist, the magician Penn Jillette, with whom "Jonesy" (Jillette's pet name for him) has been sharing the stage for more than a decade as the opening act preceding Penn and Teller's popular Las Vegas comedy / magic show. Jillette "found" Jones playing at a Las Vegas nightspot and let him know he could open for Penn and Teller with one proviso, that the neophyte Jillette would be his bassist. Given that choice, what could Jones do? He and Jillette have been performing together ever since.

Happily (for the listener), Jillette generously stepped aside for this recording date to make room for Gurrola. Add the perceptive and resourceful Hamilton and you have a piano trio that can stand its ground against any other. While Jones sets the tone with his bright and engaging melodic lines and clever ad libs, Gurrola and Hamilton provide the rhythmic muscle and unwavering support that keep the motor humming and the bus moving forward. And even though Jones has technique to burn, he is thoroughly at ease with a ballad, as he shows on "September Song," "I Know Why," "I Thought About You" and "Detour Ahead" (the last sans Gurrola and Hamilton). The session harbors a pair of charming blues ("Box Viewing Blues," "Obscuro Blues"), both written by Jones, to chaperon the tunes already named plus the standards "Besame Mucho," "It's a Wonderful World," "Day by Day," "Deed I Do" and "I'm Old Fashioned," Consuelo Velazquez' "Besame Mucho," Antonio Carlos Jobim's "Corcovado" and Fats Domino's "I'm Walkin.'"

"Magicians' hands aren't quicker than the eye," Penn Jillette writes, "but Jonesey's fingers might be." While quickness is assuredly a virtue, so is the ability to produce beautiful music at any tempo. Jones, Gurrola and Hamilton are aces-high in both areas, traits that help make Plays Well with Others a superlative piano trio recording.