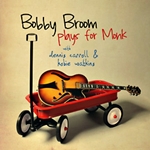 Chicago-based guitarist Bobby Broom pays tribute to jazz icon Thelonious Monk on Plays For Monk, a fresh take on eight of the late pianist's compositions, along with a couple of standards associated with Monk's repertoire. Joining Broom for his third release on Seattle's Origin Records are his long time trio mates, bassist Dennis Carroll and drummer Kobie Watkins.

Broom does a tremendous job navigating Monk's music in a bare-bones guitar trio setting. His horn-like approach to soloing, relying heavily on single-note runs, gives the trio a stripped-down sound, recalling the piano-less trio recordings of saxophonist Sonny Rollins, whom Broom has been performing with for years. The open space allows for a rich dialogue, especially between Broom and Watkins. Watkins' intense swing on the up-tempo "Evidence" pushes the guitarist to inspired creativity. Broom incorporates lush chord-melody arrangements on Monk's classic ballads "Ask Me Now" and "Ruby, My Dear" and the jam session staple "Rhythm-a-ning."

Harry Warren's "Lulu's Back in Town" and Monk's "Bemsha Swing" swing with the kind of soulful vibe Broom is known for with his popular Chicago group the Deep Blue Organ Trio. "Bemsha Swing" features a rollicking bass solo by Carroll and a spirited back-and-forth between Broom and Watkins.

The disc closes with a solo guitar rendition of Jerome Kern's "Smoke Gets in Your Eyes," a standard that Monk recorded as a solo piece. Broom's rendition is poignant and honest—much like the rest of the disc. Plays for Monk is a stunning addition to Broom's recorded output and speaks to the potential of the guitar trio in modern-day jazz.