Celebrating the classic jazz combo configuration of the Hammond B3 organ, guitar and drums, and the Black- American experience through music, Chris Foreman, Greg Rockingham and Bobby Broom bring a modern sensibility to a musical timepiece.

The Deep Blue Organ Trio began its journey in 1992 playing engagements at Chicago's Cotton Club and Back Room. At the Cotton Club, a weekly gig which lasted for two years, the group began to develop its sound and musical connection. A connection which in large part began in the 1970s, when as teenagers Chris, Greg and Bobby were studying the organ jazz sounds which would soon become classic. "My dad was an organ player who recorded and traveled a bit" says drummer Rockingham, "and I played in his group from about the age of nine until I left for Interlochen Arts Academy for high school. So, my love of organ music and my knowledge of organ maintenance comes from him." Foreman began "playing at" the organ at age five. "As a kid, I was especially attracted to the organ players that I heard on the jazz radio station. I was fascinated by the variety of sounds that the instrument could produce." Guitarist Broom's first love in jazz was organist Charles Earland's 1971 release, "Black Talk". "During my teens as I continued listening and learning about jazz, I realized the common practice of the pairing of the organ and guitar through the great combinations of Wes Montgomery with Mel Rhyne, Jimmy Smith with Wes or Kenny Burrell and Pat Martino with Don Paterson", explains Broom.

In 1999, Rockingham, Broom and Foreman realized the need to spread the word about the dynamic chemistry that they had developed over the years. "That's when we decided to officially form the Deep Blue Organ Trio", says Rockingham. A few years later they landed their regular, still running, Tuesday night gig at Chicago's Green Mill Lounge, one of the country's oldest jazz clubs. Soon after, they were recording for Delmark Records prompting Jazz Times magazine to state, "with his superb showing on their debut, Foreman stands to advance to the front ranks of the elite B3 burners on today's scene."

Three records and many miles later, the Deep Blue Organ Trio, known at home as "Chicago's premiere organ group", has also "become among the world's most prominent purveyors of the organ trio tradition." The group has captured the attention of not only jazz fans, but those in the know across the musical spectrum, from jazz-rock ambassadors to the galaxy, Steely Dan, to the Grammy Award winning, alternative rock group, Wilco, to coveted music writer, David Ritz. DBOT's Third CD, Folk Music, became a radio hit, sitting at the number two spot on the national jazz chart for four consecutive weeks. The recording also won a Chicago Music Award for best jazz CD. "I think what people are feeling from us is our celebration of the music that we love, that inspired us to be who we are" says Broom. "We swing, groove hard and play the blues with grease and sophistication and without apologies. We don't see those approaches as limitations or hindrances either." Foreman adds, "To the contrary, it's cause for celebration and who better to host the party than Deep Blue"?

The aptly named Deep Blue Organ Trio draws it's influence from the obvious sources: jazz music, the great organ combos of the past, the blues, soul and R&b, etc. What they add to the mix are nuances of the various cultural-musical developments of the past fifty-or-so years. "There's quite a bit of fodder that's available to jazz that can come from what's happened in the musical culture in our own country during the 20th century. The intermingling of different ethnic musical cultures has been an inherent activity in jazz since day one. There's nothing new about that practice and at the same time I embrace our roots in Americana and our own musical journey here, in spite of perhaps appearing ordinary", says Broom.

In fact, Deep Blue's new CD entitled Wonderful! is another celebration of Americana. Its theme is the music of Stevie Wonder, perhaps our country's most prolific singer/songwriter of the 20th Century. David Ritz, who wrote the album's notes states: '​In the performing arts there is a place for radicals and revolutionaries. We revere them for their breakthroughs. But there is also a place for the magnificent traditionalists who, steeped in a style that has become their passion, stay on course. From the onset of his career, Stevie has stayed the course as a great pop songwriter. Similarly, Deep Blue Organ Trio has been tenaciously true to the jazz/soul sounds it finds most satisfying. That these two forces have come together is cause for high praise.'

"The Deep Blue Organ Trio speaks as one." Down Beat

"With his superb showing on their debut, Foreman stands to advance to the front ranks of the elite B3 burners on today's scene." Jazz Times

"Among the world 's most prominent purveyors of the organ trio tradition." Lee Hildebrand 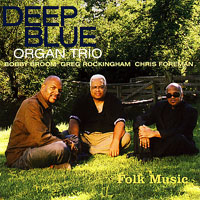 All About Jazz musician pages are maintained by musicians, publicists and trusted members like you. Interested? Tell us why you would like to improve the Deep Blue Organ Trio musician page.