By Karl Ackermann
January 24, 2023
Sign in to view read count 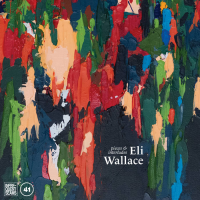 At his most experimental, pianist & composer Eli Wallace has sufficient preparations to obscure almost all the natural sounds of the piano. That has often been the case across a portfolio of half-a-dozen leader or co-leader releases, but Wallace's solo album Pieces & Interludes is a singular enigma.

The California native, now Brooklyn-based, Wallace has a varied musical background which encompasses jazz, rock, and classical music. He studied under Jason Moran and Jerry Bergonzi at the New England Conservatory while pursuing a master's degree in music. He has worked with top-tier improvisers including Daniel Carter, Billy Mintz, Ches Smith, and Trevor Dunn.

A deep drone ushers in the foreboding "Part A." The twenty-seven-minute opus is a peculiar pleasure; an ominous procession through aural landmines. Nowhere does it detonate, but the tension is palatable throughout. One can hear the door open to a more idyllic place at the halfway mark, but it is a false flag. The character of the music refuses to settle into a single frame. "Part B" emerges somewhere between an elephant's trumpet and a tabletop saw, and winds its way to the minimal acoustic piano about eight minutes in; it is a brief stopover before Wallace moves to percussive effects which feel both strange and natural. "interlude 3" opens as a boisterous assortment of prepared effects, then morphs into a stripped-down and obsidian piano.

Wallace tentatively walks to and from the chaos on the first six tracks, but he punches headlong into the mayhem of noise on the finale. Atonal but evocative, "piece 4" is the most abstract work on Pieces & Interludes. The detail is fascinating, if at times too dense to penetrate.

Wallace's highly individualized approach often uses both minimalist and extended techniques to create an immersive musical experience. He utilizes drones, tones, and other extended techniques to create either a continuous, trance-like atmosphere or an impermeable barrier of noise. On Pieces and Interludes he incorporates a variety of musical elements, with only a slight nod to convention and an open embrace of experimental musical ideas.