In an extraordinary career spanning nearly 40 years, drummer Billy Mintz has played with some of the biggest names in the jazz and pop worlds.

Mr. Mintz was born in Queens, New York in 1947. By the age of 15 he was firmly entrenched in several of the show bands of the Catskill Mountain resorts, and as his musicianship developed he would eventually tour with jazz artists such as Lee Konitz, Eddie Daniels, Harold Danko, Mike Garson, Mose Allison, Mark Murphy, and the Kim Richmond Sextet. He also toured and recorded extensively with Bobby Shew.

At the same time, his credentials grew in the pop arena, leading to tours with Juliette Prowse, James Darren, Gloria Gaynor, and a stint with the show band for the Merv Griffin Show. 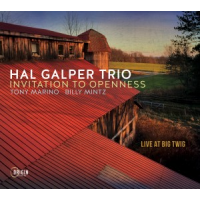 Pianist Hall Galper turned away from the life of touring in 2000, and eased into “the shed," to work on some innovative ideas that would change the shape of the piano trio. Rubato is where he went--a style of playing that stretches time, making it flexible, unpredictable and free. It takes special trio mates to assist ...

Saxophonist Lena Bloch knows something about the pain of separation from one's homeland. Born in Russia, she emigrated to Israel in 1990, then to Europe and, finally, in 2008, to the United States, setting up shop in New York City's fertile jazz ground. In 2014, Feathery, (Thirteen Note Records), the album and her quartet of that ...

Jeff Pearring's background in jazz, classical, reggae and other genres has informed his creative process in ways that are not always apparent. That turns out to be a good thing as his ability to encapsulate influences without genuflecting is part of his music's appeal. The alto saxophonist, a Brooklyn-based Colorado native, is a Connie Crothers protégé ...