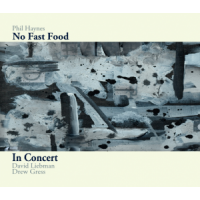 A jazz trio called "No Fast Food" is more likely to appeal to a sophisticated audience rather than attract the legion of average jazz fans, and this album will no doubt appeal to just such serious listeners who will take the time to digest it. Phil Haynes, Dave Liebman, and Drew Gress are seasoned players, all of whom strive for a synthesis of mainstream jazz with rich innovation, while mostly avoiding the free and avant garde connotations. This album, recorded at live venues, is, despite its abstract and exploratory quality, remarkably listenable and even infused with humor. That is because the three musicians are very relaxed with one another and because, despite their freedom of movement, they never veer far from home. The familiar is always present, even if it is -as one of the track titles suggests -in coded form. You're not going to be tapping your feet or humming any of the tunes, but you could get very comfortable with what you hear.

Despite the fact that the album is not likely to be a "hit" on the marketplace, it does merit musical comparison with Miles Davis' all-time best-selling Kind of Blue (Columbia, 1959). With brilliant acumen, Davis pulled a few great musicians into the studio, put some ideas (tunes and concepts) in front of them, and let them play. Similarly, drummer Paul Haynes wrote the tunes, got two very creative players to work with him, and let their combined genius hold sway without predetermined agendas. And just as Miles had the idea to expand jazz by using modal rather than harmonic constructions, the slow-cooked music on the current CD is modal and post-modally based. Modal playing allows the musicians to follow a few basic rules that are more open than standard harmonies, which gives considerably more freedom of movement. Thus, on this album, you can hear Haynes, Liebman, and Gress come up with all sorts of unusual and even idiosyncratic ideas, and yet achieve coherence within each track and across the entire two discs.

Each disc consists of a live concert "set." Set 1 begins with a laid back tune called "Dawn on the Gladys Marrie" featuring Gress on bass and Liebman on soprano saxophone. The modal quality is evident and enjoyable. It is followed by an upbeat "West Virginian Blues," which is blues only in flavor, not necessarily in chord progression. It begins with a lively cadenza by Liebman. When the piece is in full swing, it leads up to an interesting backbeat syncopated bass and drums co-improvisation by Gress and Haynes, which in turn generates a mimesis of John Coltrane by Liebman and a nod to Elvin Jones via Haynes' drum solo, culminating in what could only be described as a "crazy drunken revelry" such as one might find in the dark towns of West Virginia. This track fully demonstrates the group's capacity to generate segments or chapters within a tune, each of which tells a story.

In contrast to such a story-telling approach, "Together" is a patchwork of short, quirky phrases. The exception is when Liebman on soprano saxophone takes longer solos, playing rapid-fire improvs which wander away from tonal centers, while Gress develops some turns that have a melodic flavor around a specific key. This track tries to take the jazz "tradition" of filling in empty spaces with catch phrases to the level of an art form. The listener will have to judge whether it achieves such a lofty goal.

"Last Dance" is a morbid dirge, rivaling in clinical depression the film Last Tango in Paris. The theme of utter abandonment is stated by Liebman, while Gress conveys "agita" rivaling another movie icon, Alfred Hitchcock, by using the screechy sounds of his fingers moving along the strings in counterpoint to plucked notes. Liebman concludes with agonized cries followed by a quiescent close, suggesting that the sedative has taken effect.

"The Code" sounds a bit like a Sonny Rollins phrase sent in Morse Code. Haynes clicks out the code on his drums, and soon Liebman follows up in the manner of a sci-fi creature from another planet trying to be understood by Earth people. The repetitive quality of the phrases may have been influenced by minimalist composers like Steve Reich. In any case, the listener begins to suspect that a sense of humor is part of what the group wants. As Leonard Bernstein pointed out, humor in music has a hallowed tradition beginning with Haydn and Mozart. So the group's "jokes" are in good company.

"Ballad du Jour" is a collective group improvisation rather than a composed tune. Haynes provides a slow walk tempo which Liebman uses to develop a lovely wandering impressionist melody line. The laconic effect suggests an atelier on the Parisian Left Bank on a summer afternoon when no one is in town except a few musicians and writers.

Set 2 (Disc Two) starts with a monastic theme. "Zen Lieb" commences with monochromatic arco work by Gress with some embellishment by Haynes to suggest a monastery, and Liebman chants on wood flute, with fine subtle playing of haunting beauty by all. The modal sound is, however, oddly Eastern European even with a touch of the African plains rather than Asian.

Aside from the low register tone of Gress' bass fiddle, "Out of the Bowels" offers few of the deep resonances the title suggests. At times, again with hopefully humorous intent, the sounds do seem like a visit to the loo. Gress' clever fooling around with dyads sounds like a toilet that won't flush. You'll want to air out your room after listening to his one.

In "Workin' It," Liebman takes off on Cannonball Adderley and the piece breaks out into the only hard bop idiom in the album. There is some brilliant interplay between Gress and Haynes. It is rare to hear a bass and drums duet, and the success of this track suggests that it should be tried more often. "Blues for Israel" consists of open hand drum work by Haynes suggesting middle eastern drums, while Liebman seems to be channeling Paul Desmond's elegant sonority.

"Incarnation" is a duet featuring Haynes and Liebman. Hayne's drum and percussion work is exceptional, using faux gongs to give the feeling of the inscrutable East, as does the melody played by Liebman. Haynes amply demonstrates that drums can make their own music. The next piece, "Chant" can be thought of as an extension or second movement of "Incantation." Interestingly, it takes on an Ellingtonian flavor in the end. Finally, "Encore du Jour" provides the liveliest track on the album -the fast food— giving Haynes an opportunity to let loose on drums.

Note: This album In Concert is not to be confused with a similar one: No Fast Food (CD Baby, 2013), with the same personnel and which contains some of the same songs.