By Duncan Heining
September 5, 2014
Sign in to view read count 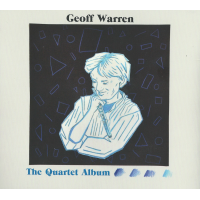 Flautist Geoff Warren has had an intriguing career that has taken in jazz, dance and world music. He has worked with British composer Graham Collier, pianist Roger Dean's group Lysis and even with British dance music bands Heaven 17 and Southern Freeez. Warren recently dropped the alto sax to concentrate his energies on flute and alto flute and, if The Quartet Album is anything to go by such dedication is paying dividends. Warren's flute sound is quite perfect, rich and ringing in tone with an almost classical clarity.

Featuring Italian musicians Raffaele Pallozzi on piano, Marco Di Marzio on electric bass and Walter Caratelli on drums, The Quartet Album is much more than horn plus rhythm. It's a very strong and intriguing group record full of well-crafted tunes, sometimes witty, sometimes affecting but always delightful. It won't surprise that Warren checks for that genius of the flute, Roland Kirk. Both "Up and Around," with its hints of Kirk's "Serenade to a Cuckoo," and "Oh, Roland," with its tumbling, skipping melody line, are fine tributes indeed. Elsewhere, Warren's first love, {Soft Machine}}, make an appearance with "Contredanse." It's a curious but highly successful mix of African rhythms and British folk music. Raffaele Pallozzi deserves full credit too for a fine, flowing piano solo here, whilst the rhythm section essays the complex 7/4 time signature with ease.

Folk music, this time Scottish, enriches both "Dreich Night in Glasgow" and "Lydian Lowlands," the latter apparently inspired by malt whisky. In which case, I'll take a large Lagavulin. Add to this, Warren's heart-felt valediction to his one-time boss, Graham Collier, on "Mr G. C." and you have in The Quartet Album an unusually attractive, satisfying blend of virtuoso playing and excellent writing.