BY ERNEST BARTELDES
September 22, 2012
Sign in to view read count 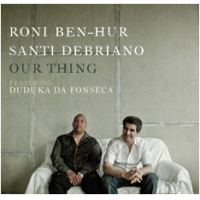 Recorded in early 2011, Our Thing marks the first studio collaboration of guitarist Roni Ben-Hur and bassist Santi Debriano. They have worked together in a live setting on numerous occasions and are joined, in this endeavor, by drummer/percussionist Duduka Da Fonseca, who brings an extra flavor to the music.

The CD opens with Thelonious Monk's "Green Chimneys," a complex track that allows the musicians to fully stretch their chops. Da Fonseca and Debriano begin with a samba-like groove, and are immediately joined by Ben-Hur, who mimics the Brazilian percussive instrument agogo, before turning to the melody. Da Fonseca's overdubbed triangle (in addition to a few more percussive instruments) leads to an Egberto Gismonti-like feel.

Debriano's title song lifts a few notes from Joe Henderson's "Blue Bossa" to indicate its Brazilian influences, but the resemblance end there. It quickly evolves into a fast-paced tune that mostly features Ben-Hur's fluid guitar but also finds plenty of space for Debriano and Da Fonseca to exercise their creativity. The disc features two Antonio Carlos Jobim compositions: "Fotografia," which features Debriano, is a slow bossa and he uses the song's tempo to explore its nuances, as well as his instrument's low tones. "Ela e Carioca" is played more like a samba and is a vehicle for Ben-Hur's electric guitar.

A final highlight is Da Fonseca's "Isabella," a slow ballad that begins with Ben-Hur's solo guitar and then shifts tempos to allow the drummer's cleverly placed accents and Debriano's grooves.

Our Thing provides a great backdrop and inspiration for the featured musicians and Ben-Hur's improvisations.