Billie Davies: All About Love

BY HRAYR ATTARIAN
September 21, 2012
Sign in to view read count 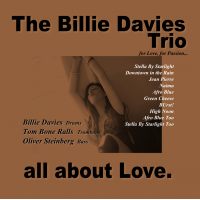 Idiosyncratic drummer Billie Davies is mostly an autodidact whose natural talent, relentless, explorative spirit and multifaceted experiences have led to an innovative approach to jazz. Her bold individualism is showcased on All About Love, a collaborative effort that has her democratically guiding an unusual, bottom- heavy ensemble with lyrical trombonist Tom Bone Ralls and versatile bassist Oliver Steinberg.

Davies creates complex motives and blurs the distinction between melody and rhythm on such pieces as John Coltrane's "Naima" and the minimalistic second take of the Mongo Santamaria classic "Afro Blue Too." Her rich harmonies contrast nicely with the atonality of her own "High Noon" that flirts with the avant-garde. The tune also demonstrates the intense camaraderie that drives the intrepid and unpredictable group interplay.

These intelligent three-way conversations, with their musical twists and turns, endow the two short originals, "Green Cheese" and "Burst," with a deliciously surreal atmosphere as Ralls' earthy and expansive trombone blows over the rapidly evolving tapestry of tight bass and drum cadences.

Ralls angular style does not sacrifice any of his warmth and lyricism on "Stella by Starlight," and his bluesy embellishments remain highly cerebral on "Afro Blue." His muted sound still swaggers on Miles Davis' fusion-esque "Jean Pierre." The track also features Steinberg's soulful electric bass and Davies' edgy and swinging kit work.

Steinberg is equally adept on the acoustic version of his instrument, as he amply demonstrates with a complex pizzicato solo on "Stella by Starlight Too." His cool and dependable grooves anchor band mate Ralls' theme, "Downtown in the Rain."

On this third release as a leader, the Belgium native/California-based Davies demonstrates a mature temperament as she skirts the edges of modal and free extemporizations with her delightfully singular trio. The intimate yet progressive music on this too brief album is like modern poetry, mordant yet sublime.