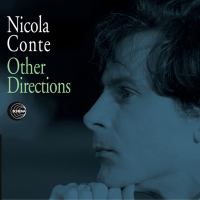 Since debuting with the quintessential acid-jazz suite Jet Sounds on the Milan-based label Schema in 2000, the composer, arranger, producer and guitarist Nicola Conte has released another ten exquisitely beautiful albums exploring acid jazz, spiritual jazz, soul jazz and bossa nova, often all on the same disc. Conte also produces other artists and has curated rare-groove bossa nova compilations for Far Out and modal-jazz compilations for Blue Note and MPS. Everything he does is erudite and lustrous and certain to bring the sun out (do not be misled by the sombre duotone designs of some of his sleeves).

Conte's albums are usually released on Schema, but he has also put out one apiece on the European wings of Blue Note and Impulse. Both companies missed opportunities by not securing the albums for their US-based home labels. Other Directions, which was in 2004 simultaneously released on CD by European Blue Note and as a 2xLP by Schema, is among Conte's creme de la creme. In 2019, Schema have vinyl and CD editions available, each with exclusive tracks.

Other Directions is the most straight-ahead of all Conte's releases. He has written that it is his tribute to, among others, Horace Silver, John Coltrane, Miles Davis, Cannonball Adderley, the Kenny Clarke-Francy Boland Big Band, Bill Evans and Yusef Lateef. It is performed by a mid-sized band assembled from A-list Italian jazz musicians. The arrangements are sumptuous and world-class soloists abound, including but not confined to alto saxophonists Rosario Giuliani and Gaetano Partipilo, tenor saxophonist Daniele Scannapieco, flautist Nicola Stilo, trumpeter Fabrizio Bosso and trombonist Gianluca Petrella. The roll call of vocalists who top and tail most tracks is equally high-end.

Twelve of the fourteen tunes are Conte originals. Some of these, such as the "So What"-ish title track, wear their historical inspirations on their sleeves. Coltrane's reading of "My Favourite Things" chimes on a couple of other tracks. The two non-originals are, as is typical with Conte, out of the left field. Both were originally included in the soundtracks of European art-house films. "All Gone," composed by British saxophonist John Dankworth with lyrics by playwright Harold Pinter, is from Joseph Losey's The Servant (1963). "Le Depart," by Krzysztof Komeda, is from Jerzy Skolimowski's The Departure (1966). Other cross-art references include Beat novelist Jack Kerouac, whose eponymous book inspired Conte's "Dharma Bums."

Side One: Other Directions; Wanin’ Moon; Waltz Of The Sirens. Side Two: Aphrodite’s Dream; Nefertiti; Impulso. Side Three: Sea And Sand; Dharma Bums; All Gone; Bohemian’s Dilemma. Side Four: A Time For Spring; Several Shades Of Dawn; Le Depart; Kind Of Sunshine.