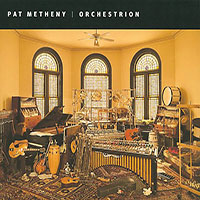 The first question that has likely crossed the minds of many who've heard about guitarist Pat Metheny's Orchestrion is: why? Metheny has already published plenty of information about this unique project at his website, but it still doesn't get to the real heart of the matter. Orchestrion is a solo album in the truest sense of the word, with Metheny the only human player, and the only improvisational component over the album's five detailed compositions. The rest of the music—a rich tapestry of percussion, pianos, "guitarbots" and more—is driven by a vast array of solenoid switches and pneumatics, a modern day extension of the late 19th century orchestrion, itself an expansion of the simpler, paper roll-driven player piano. Why would this iconic jazz musician—one who has spent the vast majority of his career working in an idiom largely defined by interplay and interaction—choose to work with a series of mechanically-driven instruments?

There's an answer, but first some background. Long before the days of digital sampling—before actual sound recordings, even—it was possible to hear reproductions of songs on pianos driven by rolls of paper with punched holes dictating which keys would be played and when. Yes, these player pianos were mechanical, losing the natural nuances created by even the most precise player's subtle variations in phrasing, time and touch. Still, it was a remarkable innovation. Even more extraordinary was the orchestrion—an array of musical instruments, most of them percussive, driven by pneumatics and electro-mechanics. Before it was possible to record real people playing real instruments, the orchestrion was the next best thing, and a remarkable sight to see: a stage full of instruments, all being played mechanically. Even in 2010, there's something otherworldly—magical, even—about the orchestrion.

As recording technology emerged—first with wax cylinders, then on to gramophone discs, magnetic tape and, ultimately, the various advanced methods available today—player pianos and orchestrions became relegated to the realm of curious archaism. Trust Metheny, then, to not only revive the orchestrion, but to work with a large group of inventors who have, over the past few years, been allowed by Metheny to build a contemporary orchestrion, one with far greater potential than its century-old predecessor. But still, the question remains: in a time when digital sampling makes it possible to reproduce virtually anything in a small laptop, why would Metheny choose to work with mechanically driven devices? Certainly they would be far more expensive to develop, and more cumbersome to take on the road—and Metheny is, indeed, taking his Orchestrion album on the road for a 2010 tour that is already booked for nearly 80 dates.

The answer is ultimately revealed on the album itself. The majority of the music is played in real time by the orchestrion, with Metheny alone layering his guitar—for the most part that instantly recognizable, warm, hollowbody electric tone—and delivering the solos that will, ultimately, be the only significant differentiator from performance to performance. But Metheny is also triggering other instruments with his guitar—mallet instruments, tuned bottles, cymbals and more—so when he is playing a part on his instrument, it's actually causing a myriad of others to play in concert with him.

For an album delivered largely through solenoid switches and pneumatics, the music of Orchestrion breathes, feeling natural, organic...human. Improvements in sampling technology have made it possible to create virtual rhythm sections that also feel more natural than when MIDI first emerged nearly 30 years ago, but they're still in the digital realm, completely removed from the imperfections— the humanity—of playing real instruments in real environments.

With an orchestrion, the same imperfections that happen when real people play real instruments can and do occur. Something as simple as a stick hitting a cymbal can vary based on criteria such as how tightly the cymbal is screwed on, or the subtle variations in the cymbal's angle and that of the stick hitting it. Magnify this with all the instruments in Metheny's orchestrion—several pianos, drum kit, marimbas, "guitarbots," a wide array of percussion instruments, cabinets of carefully tuned bottles and more—and the result is that, despite the actual programming of the orchestrion remaining identical from performance to performance, many of the same subtle nuances that affect real people playing these instruments remain at play. And that's what makes Orchestrion work.

As for the music? Not surprisingly, with Metheny in total control of the helm, this is perhaps the solo album he's been striving for ever since his first, New Chautautqua (ECM, 1979), and the more ambitious (and, to some, career-defining) Secret Story (Nonesuch, 1992). The title track is a complex piece that takes many of the elements of Pat Metheny Group's sweeping, 70-minute long The Way Up (Nonesuch, 2005)—hints of Steve Reichian minimalism, acoustic guitar-driven Midwestern Americana and, through it all, Metheny's unfailing sense of lyricism—and condenses it into a powerful, 15-minute tour de force. Vivid contrapuntal melodies weave their way in and around each other, with tuned percussion a defining textural quality. And, at its core, a lengthy solo section for Metheny which, in the new places that his orchestrion allows him to go orchestrally, clearly pushes him out of his comfort zone into some new improvisational territory as well.

That the music avoids feeling mechanical—despite the existence of fixed, predetermined parts—is a great part of Orchestrion's particular magic. "Entry Point" begins in balladic territory, but gradually ebbs and flows during the course of its ten minutes; a sparer composition than the title track, to be sure, but no less ambitious in Metheny's evolution of another lengthy solo section, one that feels as though it were being built behind him by a real group of players.

Metheny's career has been defined by a fearless pursuit of new directions. Some, like Zero Tolerance for Silence (Geffen, 1992) fall into the category of "failed experiments," but even so there's always some forward motion, something new and valuable that Metheny carries forward into subsequent projects. The Way Up was a challenge in that Metheny and his writing partner, keyboardist Lyle Mays, wrote a piece so challenging that pulling it off live with a group of players was a remarkable feat (and one that required sophisticated guidance techniques that were invisible to the audience, but were there nevertheless). Here, Metheny doesn't have to worry about such concerns, and so he's freed up to write some of the most demanding music of his career, the eight-minute "Expansion" eclipsing even Orchestrion's title track in its series of knotty changes, and sophisticated voicings that represent truly new territory, even for the ever- evolving Metheny.

It may appear to be the least ambitious track on the disc, but "Spirit of the Air" could turn out to be Orchestrion's greatest success. Another composition with a series of sections, it's the minor key blues to which the piece ultimately resolves for its solo section that's most inherently striking, where the orchestrion swings more in-the-pocket than many real rhythm sections manage.

Sacrilegious? Perhaps. For those who want unbridled spontaneity, Orchestrion may be the musical equivalent of the Anti- Christ. But for those who want to hear a musician who, in the fourth decade of a career that never seems to be going anywhere but on an upward trajectory, Orchestrion combines complex writing with an unerring appreciation of what makes music feel. Metheny may be playing with a bunch of solenoid and pneumatic-driven instruments—over 40 of them—but they play this knotty music without ever getting tired, without ever making mistakes, and with a sense of groove and dynamics that make it difficult to believe that they're anything less than the real deal.

Orchestrion will, most likely, be a one-off project for Metheny, but unlike Zero Tolerance for Silence, it can be considered not just an unqualified and unequivocally successful experiment, but as one of the most innovative and compositionally profound albums of his career.