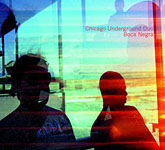 Drummer Chad Taylor's and cornetist Rob Mazurek's intention with Boca Negra is to present the listener with "an emotional experience that transcends the idea of genre or label." The principle of inclusiveness starts with the recording location, Sao Paulo in Brazil, and continues through to the album's packaging: the cover shot was taken on the shore of the Dead Sea, while the title, which means "black mouth," comes from Tenerife in the Canary Isles (where it was coined to describe the crater of a local volcano). The fifth Chicago Underground Duo album, it's the first to have been recorded outside the group's native city.

The global references bode well, but don't expect a set of "world jazz." The music could have been made pretty much anywhere, with only Taylor's mbira suggesting a link to Brazil, where it is generally known as the sanza. And if there are any Middle East or Canarian resonances, they are well disguised.

Like its predecessors, and fittingly (though probably coincidentally), given the name of the group, Boca Negra explores dualities and the tensions which exist between them. Composed vs improvised music. Visceral grooves vs ambient soundscapes. Folkish simplicity vs polyrhythmic sophistication. High energy rock outs vs gentle balladeering. Reiterative ostinatos, riffs and motifs vs freewheeling improvisation. The yin and yang of creative, collaborative music making.

Most of the tracks include substantial electronic content, with digitally generated "flutes," "guitars" and "bass guitars" features of around half the tracks, and less readily identifiable sounds heard on practically all of them. Tinkling, trippy "keyboards" are the focus of "Hermeto," which sounds like an homage to minimalist composer Terry Riley, and in particular his iconic "In C." Only "Green Ants" and the cover of Ornette Coleman's "Broken Shadows" are for the most part acoustic.

The album was produced by Matt Lux, who as a bassist is a member of other groups featuring Mazurek (Exploding Star Orchestra, Mandarin Movie) and Taylor (Iron And Wine). Along with the location of the recording, there are a couple of other "firsts:" it's the first time Taylor has brought along his laptop (Mazurek has previously done the digital work unaided), and it's the first time the group has recorded a cover.

Wherever it was made, and wherever it is heading, Boca Negra is a delight to get lost in.