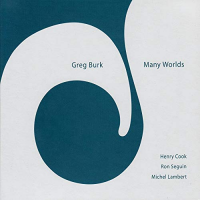 A startlingly original improviser, rising pianist Greg Burk straddles a confluence of traditions, seamlessly balancing the spontaneity of free jazz with the discipline of mainstream conventions. A former Either/Orchestra member and student of Paul Bley, Yusef Lateef, George Russell and Archie Shepp, Burk possesses an uncanny gift for melody that surpasses many of his peers. On Many Worlds, Burk unveils an evocative array of pre-written tunes and collective compositions that exude a rich chiaroscuro, bolstering frenetic free improvisations with mellifluous themes.

Divided in two parts, the first half of the record consists of tunes written by Burk, Lambert and Seguin, with the second half bearing the collectively composed title suite. Seguin's "Sonny Time" opens the date with a beatific invocation of bucolic vistas before Burk and Cook careen through the intervallic head melody of "BC" in unison, setting the stage for a quicksilver free-bop excursion. Skirting conventional tonality without abandoning form, the piece features a string of vivacious solos, introducing each member in turn. Easing into ruminative territory, the cinematically lush "Lost Time" shadows Lambert's ghostly "Storm Cloud" before "Look to the Lion" ends the record's first half with a lilting modal theme reminiscent of Pharoah Sanders' Impulse!-era work—a joyously ebullient tune underscored by minor dissonances.

The titular six-part suite encompasses a similar wealth of moods and tonal colors, undulating between scintillating opulence and roiling fury on the introductory "Many Worlds" and the cacophonous fanfare of "The Strong Force." Guided by Burk's labyrinthine cadences, the quartet settles into the episodic "Waves / Scattering Matrix," ebbing with oblique swing before modulating from pointillist introspection to pungent impressionism. Boasting a memorable melody and spare, sensitive rhythm section accompaniment, "In Pursuit of Matter" continues the thread, featuring some of Burk's most poignant variations. Cook's haunting, vocalized alto fuels the quiet, but severe "Particular," building to the cathartic John Coltrane-esque finale, "The Spirit Will Take You Out." Interweaving with Burk's cascading filigrees, Cook's scorching soprano soars above the rhythm section's tumultuous undercurrent, closing the date on a high note.

This variegated quartet session sets a new standard in Burk's budding discography, which was previously dominated by solo and trio excursions. Drifting gracefully between the composed and improvised, Many Worlds unveils a rich ebb and flow between freedom and form.

Sonny Time; BC; Lost Time; Storm Cloud; Look to the Lion; Many Worlds Suite: Many Worlds; The Strong Force; Waves / Scattering Matrix; In Pursuit of Matter; Particular; The Spirit Will Take You Out.