Prolific bassist/composer Rick McLaughlin performs and records with a number of Boston�s all-star ensembles including the Grammy-nominated Either/Orchestra and the Jazz Composers Alliance Orchestra. He has also performed in concert halls and jazz clubs around the world. Once called "one of my favorite bassists" by the legendary George Russell, he also leads the versatile Rick McLaughlin Trio. With a repertoire ranging from original compositions to Ellington standards to an arrangement of the second movement of the Ravel string quartet, the Rick McLaughlin Trio puts a modern spin on the drummer-less trio format made famous by groups like the Jimmy Guiffre 3 and the Oscar Peterson Trio on their critically acclaimed 2003 debut, Study of Light (Accurate). A contributing writer for DrumPRO magazines, McLaughlin is a freelance bassist/composer who has performed with musicians like Mulatu Astatke, Don Byron, Mick Goodrick, Steve Lacy, John Medeski, Bob Moses, Danillo Perez, John Zorn, and the rock band Morphine, among many others, in concerts throughout the United States and Europe, Thailand, Ethiopia and Uganda

Never far from the pulse of jazz innovation, New York in the 1980s incubated what has become known as the “downtown scene." Radically multi-stylistic, the resulting music was unabashedly eclectic, celebrating influences from bebop to punk rock to cartoon music and eventually klezmer and Balkan music “From the shrill, colorful legacy of noise music and new ...

About Greg Burk Following his acclaimed 2016 release Clean Spring on SteepleChase Records, American pianist and composer Greg Burk returns with solo piano As A River--his 12th and most lyrical album to date. The son of classical musicians, Burk spent his formative years on the jny: Detroit jazz scene, followed by studies ...

Inspired by Head Full of Hair, Heart of Full of Song, Pyeng Threadgill's investigation in music about the role of hair in her life, family, community and throughout the African diaspora, this episode of Mondo Jazz builds a narrative about hair, because --whether it's a braided bun or flowing tendrils --hair has always mirrored the cultural ...

Bruce Torff: Down the Line 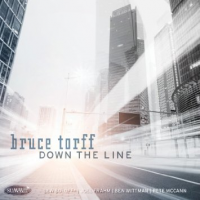 Chicago area native, Bruce Torff, leads his second outing on Summit Records, following up on Look Again (2013). Torff is, first and foremost, an academician with three Master Degrees and a PhD from Harvard. He is a professor at Hofstra University and a prolific author, as well an excellent keyboardist and composer. Torff's slim recorded musical ...

Trumpeter/vocalist Bob Merrill has had an amazingly varied career in and around music—mentored by his late father-in-law Joe Bushkin, Jaki Byard, and Red Rodney; starting and operating Hip Pocket Recording Studios in jny: New York City; and recording as a leader himself. Cheerin’ Up the Universe, his new CD and fourth to date, is being released ...