Prolific bassist/composer Rick McLaughlin performs and records with a number of Boston�s all-star ensembles including the Grammy-nominated Either/Orchestra and the Jazz Composers Alliance Orchestra. He has also performed in concert halls and jazz clubs around the world. Once called “one of my favorite bassists” by the legendary George Russell, he also leads the versatile Rick McLaughlin Trio. With a repertoire ranging from original compositions to Ellington standards to an arrangement of the second movement of the Ravel string quartet, the Rick McLaughlin Trio puts a modern spin on the drummer-less trio format made famous by groups like the Jimmy Guiffre 3 and the Oscar Peterson Trio on their critically acclaimed 2003 debut, Study of Light (Accurate).

A contributing writer for DrumPRO magazines, McLaughlin is a freelance bassist/composer who has performed with musicians like Mulatu Astatke, Don Byron, Mick Goodrick, Steve Lacy, John Medeski, Bob Moses, Danillo Perez, John Zorn, and the rock band Morphine, among many others, in concerts throughout the United States and Europe, Thailand, Ethiopia and Uganda. Along with his debut as a leader, McLaughlin's recent discography includes the Either/Orchestra's Ethiopiques 20: Live in Addis (Buda Musique), Peter Kenegy's Little Machines (Fresh Sound/New Talent), and the Jazz Composers Alliance Orchestra's A Celebration of Spirit (CIMP Records).

In addition to having a private bass studio, I am a member of the New England Conservatory faculty, teaching theory and history classes, coaching jazz ensembles and giving private bass lessons to musicians of all ages. 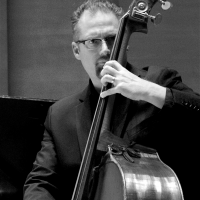 All About Jazz musician pages are maintained by musicians, publicists and trusted members like you. Interested? Tell us why you would like to improve the Rick McLaughlin musician page.