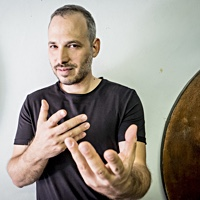 A pianist and composer with vigorous, freewheeling ideas that always feel grounded within a well-reasoned structure.
—Boston Herald

Pianist/composer/educator Greg Burk has lived, studied, educated and performed around the world. Over the last decade, living and working in Detroit, Boston and now Rome, he has established himself not only as a vital sideman, but also as a leader with the rare ability to combine original compositions with memorable melodies and a desire to push the creative envelope as an improviser.

He has been called "an exceptional pianist/composer" (All Music Guide), "a pianist and composer with vigorous, freewheeling ideas that always feel grounded within a well-reasoned structure" (Boston Herald), "a pianist with a gift for melody and a generous touch that makes you want to like him" (LA Weekly), and a musician that "plays with an apparent love and passion for his craft" (AllAboutJazz).

Greg grew up in a culturally diverse and musical household. His father, Dennis Burk, was an internationally active conductor and the son of Russian and Polish immigrants. Greg's mother, Giovanna Collonelli, was a singer and linguist who came to the U.S. in her 20's. In her native Italy, she was a trained opera singer and winner of a national competition to study at La Scala in Milan. Greg began studying piano at age six with his grandmother, Billie Endervelt, a classically trained pianist and improviser who accompanied silent movies in her youth.

At 15, Greg discovered jazz and by 16 he was working professionally, playing solo gigs and in a group with some friends. Before leaving high school, his group performed at DownBeat's Musicfest in Chicago, where Greg was awarded outstanding soloist. His decision to become a professional musician was solidified as a teenager when friend and Detroit-based bassist Rodney Whittaker took him to hear and sit in with veteran jazz musicians and the talented younger players from the city's fertile musical scene.

As a music composition student at UMASS Amherst, Greg was fortunate to have Yusef Lateef and Archie Shepp as teachers. "Lateef's approach to teaching improvisation/composition was as organic and spiritual as it was systematic and disciplined," Greg remembers. "This approach allowed me to cultivate my ideas freely while tempering them with form and specific materials. Shepp's teaching was more hands-on and involved playing Bird and Ellington tunes each week."

With composer/bassist Sal Macchia, Greg's studies included aural training, orchestration and composition. He finished his degree at the University of Michigan, where he received a Bachelor's Degree in English and Music.

After graduation, Greg settled in Bratislava, Slovakia, from which he toured throughout Czechoslovakia, Poland, Austria, and Italy, appearing in clubs, at festivals, and on radio and television.

At 25, Greg moved to Boston and enrolled at New England Conservatory (NEC), where he earned a Master's Degree in Jazz Studies, having studied composition with George Russell and piano with Danilo Perez and Paul Bley. Russell's concept had a profound impact on Greg's musical thinking, as did Bley's open approach to improvisation. He also had the opportunity to play as a student with Curtis Fuller, Sam Rivers, Cecil McBee and the George Russell Big Band. Greg credits the combination of this progressive education with the dues he paid playing bebop in Detroit as the catalyst for creating his own inside/outside approach to music.

After earning his Master's, Greg continued to live in Boston, teaching at Berklee College of Music and working as an in-demand sideman with notable musicians like Jerry Bergonzi, Garrison Fewell, Steve Grossman, Benny Golson, Bob Moses, and others. He also joined the Grammy®-nominated Either/Orchestra, appearing on three of the group's recordings, Afro-Cubism, Neo-Modernism, and Live in Addis. During his tenure, the group toured throughout U.S., Italy, Russia and Ethiopia.

His work under his own name in Boston was equally extensive. Along with numerous solo piano performances, Greg led/co-led a duo, two trios, an original quartet, and a second quartet that performed commissioned jazz arrangements of Bach pieces. These groups featured notable sidemen including Jerry Bergonzi, Gerald Cleaver, Paul Del Nero, Garrison Fewell, Luther Gray, Jon Hazilla, Bob Moses, and Jonathan Robinson. He also continued to perform around the world, and founded the Sant'Elpidio Jazz Festival in Le Marche, Italy.

Inspired by mentor Paul Bley's advice to continually document one's own music, Greg has recorded extensively with all of his groups. Along with three self-released solo piano recordings, he has three recordings on the legendary Soul Note/Blacksaint Italian label, and three recordings on the forward looking 482 Music. After nearly 10 years in Boston Greg relocated his family, including wife Serena and daughter Sonia, to Rome in June 2004. Daughter Maia was born in Rome on July 1, 2005. Greg continues to actively record and perform as well as teaching Jazz Piano and Aural Comprehension at New York University's Florence music program. Show less

"...a pianist with a gift for melody and a generous touch that makes you want to like him..."
—LA Weekly

"Burk's touch on the piano remains confident and even, his statements being made with proficiency and concision and without overstatement."
—Cadence

"With this release, Burk displays a penchant for pursuing lushly melodic themes interspersed with a distinct sense of poise to complement his altogether laudable faculties. Simply put, there's a lot of goodness going on here, as the pianist bobs, weaves, and dances atop the rhythm section's bouncy swing grooves. Listeners can look forward to hearing more from this exceptional pianist/ composer."
—All Music Guide

"...a pianist with a gift for melody and a generous touch that makes you want to like him..."
—LA Weekly

"Burk's touch on the piano remains confident and even, his statements being made with proficiency and concision and without overstatement."
—Cadence

"With this release, Burk displays a penchant for pursuing lushly melodic themes interspersed with a distinct sense of poise to complement his altogether laudable faculties. Simply put, there's a lot of goodness going on here, as the pianist bobs, weaves, and dances atop the rhythm section's bouncy swing grooves. Listeners can look forward to hearing more from this exceptional pianist/ composer."
—All Music Guide

"Why don't more ensembles try to unite the spontaneity of free jazz with the discipline of straightahead, as the Greg Burk Quartet does on Carpe Momentum (Soul Note)? Probably because it's really hard. Nevertheless, pianist/composer Burk has found a way to write pieces that incorporate elements of both, and he and his bandmates Jerry Bergonzi (saxophones), Jonathan Robinson (bass), and Gerald Cleaver (drums) have found a way to play them brilliantly...Carpe Momentum is mesmerizing from the get-go."
—JazzTimes

"Greg Burk comes along for the third time as leader with Nothing, Knowing and proves beyond any shade of doubt that he has the distinct ability to turn a tune into an exciting and imaginative journey."
—All About Jazz

"This program definitely keeps one guessing, for Burk is difficult to easily categorize as anything but a creative jazz musician. His interplay with his sidemen is nearly telepathic at times (they all have big ears) and they consistently shift musical directions and share thoughts together. Listeners who enjoy explorative and passionate jazz improvising will definitely want this outing."
—All Music Guide

"In the end, this very moving music compels introspection as we watch and listen while Burk brings us into intimate contact with his soul, both human and musical."
—All About Jazz

"Beauty remains at the top of his list, as Burk invents tone poems that cast impressions with connotations far and wide. The delicate touch of his keyboard and the care with which he operates the pedals allow Burk to communicate in a manner that we can all understand and enjoy."
—Cadence

All About Jazz musician pages are maintained by musicians, publicists and trusted members like you. Interested? Tell us why you would like to improve the Greg Burk musician page.