BY MARK CORROTO
February 25, 2019
Sign in to view read count 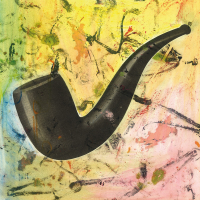 This gem of a recording has been a collector's dream prize for decades. Recorded and released in the mid-1970s on flugelhorn/trumpeter Franz Koglmann's Pipe Recordings, each copy of Opium For Franz was issued with an original hand painted cover. Back in the day, we wouldn't speak of a limited issue release, even though this one probably came out in an edition of 200. Certainly it was a labor of love, with no such thing as our modern digital capture of sound and pro tools. We're talking studio time, tape, and expensive vinyl production. Unlike today, with limited edition vinyl mining a nostalgia for experiences young musicians never had, It's certain Koglmann considered that this disc could, one day, become a collector's item.

Thankfully, listeners don't have to shell out a couple hundred dollars to hear this recording with its original track list. Pieces of this LP and the Koglmann/Steve Lacy's Flaps (Pipe, 1973) were included on the disc Opium (Between The Lines, 2001).

Opium For Franz features an interesting intersection of musicians. Trumpeter Bill Dixon was in Europe, taking a break from teaching at Bennington College in Vermont. He had gained a reputation in the avant-garde with his work in The October Revolution in Jazz (1964) and in recordings with Archie Shepp and Cecil Taylor. Also in Europe was Lacy, although he had lived there as an expatriate since 1970. The intersection, though, wasn't between Dixon and Lacy—they don't perform together here. These For Franz sessions are significant for the introduction and recognition of Koglmann's horn and, probably more importantly, his compositions.

The opening title piece by the Koglmann/Dixon quintet opens with Alan Silva's bowed bass, a true juggernaut of sound, before a line of pacific horns enters. As with much of Dixon's and Koglmann's music, the mode is cinematic. Dixon arranges the parts to mix melody with meditations, solos vault into the composition and recede. Fans of Dixon's later work will hear the early seeds planted here.

Side B, contains the remaining three tracks. Lacy is aboard for two, and the fourth is an early experiment in electronics. Koglmann's two compositions for the soprano saxophonist sound very Lacy-like, meaning "Der Vogel, Opium (To Jean Cocteau)" and "Carmilla (To Sheridan Le Fanu)" take their cues from Thelonious Monk's conceptions, and Lacy is instantly recognizable. We also discover (re-discover?) Austrian trombonist Joseph Traindl, who is given plenty of space here. The trio composition "Karl Und Das Löschpapier (To Konrad Bayer)" finds Koglmann and bassist Toni Michlmayr grappling with Gerd Geier's computer. Consider electronic music and computers in 1975. Yes, the sounds are the same primitive bleeps and blings you hears in the sci-fi films of the era. Damned interesting that they got included on the most rare of recordings.

The reissue is available in both CD and vinyl.