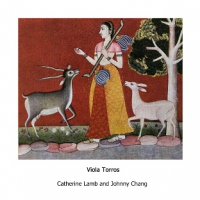 The title of this two-CD set, Viola Torros, refers to an enigmatic female musician from the late Vedic period who was born somewhere in the Indus valley region, before roaming far and wide. (Those keen to know more about her are best directed here.) Johnny Chang and Catherine Lamb have researched and collected fragments of Torros' music. Disc One of this set consists of two recordings of such fragments, recorded in August 2017 in Dusseldorf and May 2018 in Berlin, arranged by Lamb and Chang, featuring them on violas. Tellingly, the pieces are entitled "V.T. Augmentation II" and "V.T. Augmentation III," indicating that the Torros fragments were augmented by Chang and Lamb so that the end results are a three-way collaboration. Given that, both versions can be judged successful as they eloquently convey a flavour of Torros' music without remotely sounding like a collection of bolted-together fragments; on the contrary, the music is coherent and very listenable throughout.

Inevitably, the combined violas of Chang and Lamb are central to that success. Their playing displays great subtlety and restraint, with the music seeming to effortlessly evolve without any sudden or surprising changes; interspersed with drone-like passages from the violas there are enough occasional snatches of melody (Torros,' presumably) to keep the music fresh and stimulating. Subtle, understated use of electronics adds coloration to the violas, as does the introduction of voices; but they seem like garnish compared to the two violas. Although fundamentally similar, the two realisations of "V.T. Augmentation" are different enough to each other to make comparison of them worthwhile and rewarding. Together they run for just over seventy-eight minutes, making the set's first disc one to savour and return to time and again.

The second disc consists of two compositions, one by Chang, the other by Lamb, which are in stark contrast to one another. Chang's "Citaric Melodies III" was recorded in Tokyo, in February 2018, by the eight-piece Suidobashi Chamber Ensemble, with Chang himself on viola, alongside a selection of reed and string instruments, with the latter predominating. Together, the eight combine to create a richly detailed and flexible soundscape which the composition suits perfectly and displays to maximum effect. The music overlaps slowly-changing instrumental sounds, creating a kaleidoscopic effect that makes for a pleasantly relaxing half-hour of listening.

The album closes with Lamb's forty-two minute "Prisma Interus VI (for v.t.)," recorded in Berlin, in October 2017, the piece again features Lamb and Chang on violas, with Derek Shirley on cello and Andrea Neumann on "secondary rainbow synthesiser." Its bracketed dedicatee is Torros, and Lamb has said, "the piece includes some melodic and modal components/directives that are taken from Viola Torros' fragments, specifically the ones we were working on in Dusseldorf during the time of 'Augmentations II,' but which also seem to appear in 'Augmentations III' "—so it makes a fitting finale to this set. And, given all that has gone before, that is praise indeed.

About Catherine Lamb and Johnny Chang