BY EYAL HAREUVENI
November 10, 2012
Sign in to view read count 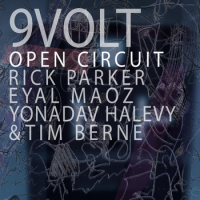 The career of Israeli guitarist Eyal Maoz, now based in New York, is a schizophrenic one. He releases albums on the Tzadik label with his Radical Jewish quartet Edom (the self-titled, 2005 debut and 2009'sa Hope and Destruction) and takes part in saxophonist John Zorn's ongoing Masada songbook, including 2012's Abraxas: The Book Of Angels, Volume 19, but surrenders to Zorn's aesthetics and is eclipsed by the guitar school of Zorn's musical partner, Marc Ribot. More interestingly, Maoz is a gifted and a highly original composer and an exceptional guitarist who has led the now defunct brilliant Lemon Juice and is now a proficient free improviser, as he proves in his duo with fellow Israeli ex-pat, drummer Asaf Sirkis on Elementary Dialogues (Ayler, 2009).

The 9Volt = 45284 project belongs to his freer kinds of projects. Maoz with like-minded trombonist Rick Parker and another Israeli ex-pat, drummer Yonadav Halevy (who leads post-funk and hip-hop bands), have been working together for three years. The trio enjoys exploring and experimenting with the energy of the moment. Maoz and Parker expand their vocabularies with the creative use of effects. while guest saxophonist Tim Berne-who collaborates with Parker on the not-yet-recorded 4Limones quartet-injects more power and intensity to half of the tracks on 9Volt's debut.

The opening, Parker-penned "Squegee" flows through streams of energy, divided loosely among the four musicians. Berne and Parker's sharp blows merge into Maoz's distorted guitar and spiraled with Halevy's propulsive drumming, creating a thick blend of free, fiery jazz and experimental, art rock. Parker's "3 and 2" and "Cubafone" adopt the intuitive and restless narrative typical of Berne's compositions with enough room for sonic explorations. The trio-penned "Yes Your Majesty" is a deep dive into electronic textures.

Maoz's compositions feature the full breadth of his musical language. "Blue Screen" is an intriguing, cinematic piece that builds its tension patiently. "Foglah" is a partly ironic, partly heartfelt tribute to Zorn's musical legacy, including the usage of post-modernist, brief cut-and-paste references, from Ennio Morricone's western soundtracks to cartoonish, playful themes mixed with the uncompromising attack of bands like Naked City and Moonchild. "Wind of Water" is a rock ballad with periodic injections of speedy, electronic steroids. "Old Vodka" has a catchy, emotional theme, spiced with imaginative, electronic excursions.

Promising a synthesis of energy, these are wise compositions and sonic adventures.