By Doug Collette
November 10, 2012
Sign in to view read count 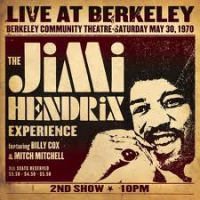 Released with virtually no fanfare, the compact disc of The Jimi Hendrix Experience Live at Berkley is nonetheless one of the most noteworthy of the seemingly innumerable archive titles that have come out since the rock icon's death. Though the graphics and design are virtually identical to a previously issued package, the sound, though apparently not remastered, is less trebly and more full, all the better to hear the rhythmic inflections of drummer Mitch Mitchell, not to mention the steady but nevertheless mobile bass work of the redoubtable Billy Cox, the former Army comrade of Hendrix's who the guitarist recruited to replace the departed Noel Redding of the original trio lineup.

Accounts of the later months of Jimi Hendrix's life invariably make reference to pressure he felt from various sources, formal and informal, to render his music with a more topical socially conscious slant. Equal if not greater pressure arose from the artist's management to maximize the commercial potential of the Experience's well-established power trio sound. This Berkley show was recorded to substitute for the reduced touring commitments Hendrix insisted upon at this time so that he could spend more time in his custom-designed Electric Ladyland recording studios in New York.

As noted by essayist and co-producer John McDermott, at this juncture of his career, Hendrix much preferred new materia-like including a rough version of "Straight Ahead," called "Pass It On"-plus the blues-derived ballad "Hey Baby (New Rising Sun)." No doubt he was convinced his new compositions could be effectively used to greater ends, as is definitely the case this May night in 1970 at The Berkeley Community Theatre.

Still, despite quickly muttered intros, staples of the Experience repertoire including "I Don't Live Today" (where drummer Mitch Mitchell is arguably at his most dynamic) and the otherworldly riff-rock template, "Voodoo Chile (Slight Return)," are of a piece with more recent compositions as they take on new meaning(s). For instance, while "Foxy Lady" sounds like nothing more than comic relief in this context, "Hey Joe" gains a contemporary slant as a portrait of what The Rolling Stones dubbed a "Street Fighting Man."

Even post-Woodstock 1969, Hendrix's cataclysmic version of "The Star Spangled Banner" remained a sonic portrait of a country at war with itself and its own ideals, a sensation reinforced here as he couples it with his own "Purple Haze." That tune from Are You Experienced? (Reprise, 1967), while often thought of as an anthem of the drug subculture, here instead conjures images of death and destruction in the metropolitan streets of America, the likes of which were all too common at the time of this recording. Hendrix pointedly offers Band of Gypsys' "Machine Gun," to "soldiers fighting in Berkley and Vietnam and all those at war with themselves, not facing up to reality."

Quite likely Jimi Hendrix was referring to himself as well, but in so doing, the iconic guitarist displayed the wisdom of peers including The Beatles and Bob Dylan, who knew all too well how art transcends politics, even as it directly addresses social issues, because its concerns are ultimately personal and universal. In the entire Jimi Hendrix discography, official and unofficial, there may not be a more unequivocal personal and artistic statement than Live in Berkeley.