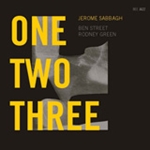 French tenor man Jerome Sabbagh has been exploring the sax trio format around New York City clubs for more than five years. One Two Three takes a selection of standards—some well-known, others less so—and gives them a good old-fashioned workout in the studio. The results are quality; like good red wine, it only gets better the more you drink it in. And it also shows that classic jazz is as full of life and vitality as ever, provided it's in the right hands.

When discussing a trio of tenor sax-bass-and-drums, it's impossible to ignore Sonny Rollins, whose influence carries from New York's classic Village Vanguard sessions all the Way Out West(OJC, 1957). And fans of Newk's Time (Blue Note, 1957) should enjoy this album, for while Sabbagh is no doubt his own man, his intonation, attack, and note choices here draw heavily off classic Rollins. Thelonious Monk's "Boo Boo's Birthday" is a great example of this, full of the brash, lilting Rollins vocalizations.

But Sabbagh's sound also leaves a certain lingering smoothness, a flavor like chocolate in his tone. It's this that keeps him on his own two feet. He seems to simmer between the notes, building a tense bluesiness from the angularity of the session's other Monk tune, "Work." The gorgeous, mellow solo sax intro to "Body and Soul"—traditionally a showpiece for aspiring saxophonists to prove their mettle in the footsteps of the great Coleman Hawkins—shows a talent that's striving for more than technical virtuosity. This, alongside the unforced lyricism of a tune like Bill Evans' "Turn Out the Stars," shows Sabbagh's ability to move with a classic ease seldom heard in modern jazz. His knowledge of harmony and melody makes it all seem too easy. It's as if he has the lyrics in his horn, and sings them out tune by tune with a mix of passion and wordplay.

Drummer Rodney Green and bassist Ben Street mesh to create a tight background, dropping in and out as necessary. The sax gets most of the play time, but they make the music sound that much better with the right rhythm and atmosphere. An example is heard in the interplay between Green and Sabbagh on "Just In Time," which opens up the tune so wide that Street's return on bass makes the group sound larger than three.

While One Two Three refers to the solo, duo and trio permutations that make these songs, it might also refer to how easy the three musicians make it seem. The space this group makes on this record is intimate and warm. Taking familiar tunes, they transcend the supposed limitations of any group setting. And on repeated listens, the music only grows in stature.