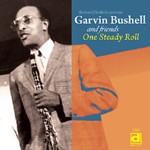 Garvin Bushell's autobiography, published in 1988, is called Jazz From The Beginning. There's no hyperbole about that title considering he was a musician who worked with both Fletcher Henderson and John Coltrane. This session was recorded later in his life—in California in 1982—and the music hews closer to the Henderson model than it does the Coltrane, with more than a little aspect of older jazz forms about it. However, anyone for whom that's a problem clearly isn't as open-minded as Bushell himself was. Besides, the music's damn fine anyway.

It's not every day that the spirit of Sidney Bechet's sides with Mezz Mezzrow from the second half of the 1940s is evoked, but here it is on both parts of "Blues For The Twentieth Century." In the company of soprano sax man Richard Hadlock, a man who hues closely to the Bechetian ideal, the two men spin out the lines like men to the manner born. Pianist Ray Skjelbred is as steeped in the blues form as Sammy Price was on those sublime little masterpieces from sixty odd years ago, so that helps, while as a clarinetist Bushell's thankfully a different proposition to Mezzrow.

On "My Daddy Rocks Me (With One Steady Roll)," guest cornetist Leon Oakley conjures up Wild Bill Davison at his most irascibly ebullient, shouting like he knows there's a tomorrow but the night preceding it is too seductive to ignore. Here Bushell shows himself to be almost as idiosyncratic a stylist as Pee Wee Russell, albeit a more reliable one. It all adds up to a whole lot of fun.

When Bushell takes up the bassoon, however, he casts things in a whole different light, as he does on "I'm Getting Sentimental Over You," where Hadlock takes the restrained lead and drummer John Markham provides a soft but propulsive beat on brushes. Hadlock nods to Johnny Hodges in the way he shapes some notes, and the extraordinary thing with Bushell's solo is that it initially sticks closely to the melody before it expands enough to take in Coltrane's extended vocabulary.

The morose joy of "My Daddy Rocks Me (With One Steady Roll)" proves a whole lot more besides the fact that that contradiction can indeed be pulled off. Hadlock is close to his individual best here, while Oakley again shouts it from the top of a hill, with flags waving. Bushell proves he could be expansive too, when the mood took him, and it's praise indeed to say that he evokes the spirit of Edmond Hall.