Home » Jazz Articles » Christina von Bülow: On The Brink Of A Lovely Song

Christina von Bülow: On The Brink Of A Lovely Song 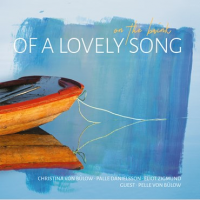 Konitz, who played on the classic Gil Evans/Miles Davis Birth Of The Cool session, is now in his nineties. It is to be hoped that, no matter the vicissitudes old age may have visited upon him, when he listens to this album, he will smile slowly to himself and perhaps shed a tear as he realizes, hopefully for the umpteenth time, that his living has not been in vain.

In her sleeve note, von Bülow eulogizes: "Mr Lee Konitz... has been a constant inspiration throughout my musical career. This album is a reflection of this inspiration—I owe a lot to this legendary alto player and master of improvisation."

While this is true, she has taken matters one step further. Konitz was very masculine in his approach. Like a man mucking about with an old car, he liked to experiment, tinker with the music he played, at one point in his career even seeking the aid of electrical amplification. This did not please everyone.

Von Bülow, being a woman and a mother, prefers to concentrate on nurturing songs to all-round fruition. Her melodic lines are rich and full and combine to create a musical oneness. You hear Konitz in her playing but it is always a very feminine interpretation.

The end result is a truly magnificent album.

To take just one number, "I Loves You Porgy," written by Gershwin to be sung by a woman, her interpretation wrings meaning from the melody, exposing the very heart and soul of the song.

There's also her own tribute to her mentor, "Out Lee," which features her son Pelle on guitar—the Konitz legacy passed on to a new generation.

All these songs are immaculately polished musical gems. Von Bülow has been greatly helped in her creation of what is surely destined to become a landmark of Scandinavian jazz by the sympathetic, intuitive playing of young Pelle as well as that of Palle Danielsson on bass and Eliot Zigmund on drums.

Together they have created a modern classic.

I Should Care; Just Too Very; Still Love You So; Out Lee; Don’t Blame Me; I Love Paris; I Loves You Porgy; Of A Lovely Song; The Peacocks; Sörgemarch.