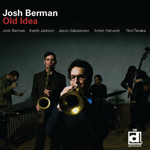 As co-leader of the Emerging Improvisers and Umbrella Collective with drummer Mike Reed, cornetist Josh Berman has been a pivotal force in the Chicago jazz scene. A regular member of Jason Adasiewicz's Rolldown, Jeb Bishop's Lucky 7's, Keefe Jackson's Project Project and Fast Citizens and Rob Mazurek's Exploding Star Orchestra, Berman has proven to be a strong new voice of the post-Vandermark generation.

A richly textured and delicately nuanced record, Old Idea is Berman's long awaited debut as a leader, fronting a quintet of regular collaborators Keefe Jackson (tenor saxophone), Jason Adasiewicz (vibraphone), Anton Hatwich (bass) and Nori Tanaka (drums). As is typical of the tight-knit Chicago scene, all of the quintet members play together in other ensembles, lending the session an air of carefree congeniality.

Berman is a longstanding member of Adasiewicz's quintet whose debut, Rolldown (482 Music, 2008), shares many stylistic similarities with this date. Like Adasiewicz, Berman re-interprets the asymmetrical melodies, fractured rhythms and striking harmonies of the innovative mid-1960s Blue Note recordings of Eric Dolphy, Andrew Hill, Jackie McLean and Grachan Moncur III for a modern age.

Berman's open-ended writing is complemented by his buttery tone and malleable phrasing, favoring the cornet's mid-range over piercing, brassy pyrotechnics. Mirroring his approach towards improvisation, Berman's pieces rely on oblique narratives rather than conventional head-solo-head formats for direction. The loose "On Account of a Hat" opens the record with a capricious arrangement and string of feverish solos driven by endlessly modulating rhythmic accompaniment. Berman and Adasiewicz contribute strong statements as Jackson's blustery tenor provides the tune's climax over a rapidly deconstructed vamp.

The timeless ballads "Db" and "Almost Late" resonate with maturity, the latter featuring a sumptuous, restrained duo cadenza between Berman and Jackson—a perfect pair. The Latin-themed "What Can?" employs similarly unconventional instrumental combinations, with Berman and Tanaka locked in an effusive duet.

Serving as brief interludes, three different versions of "Next Year" offer potent reminders of Berman's compositional prowess, veering from contrapuntal exercises to rhythmic studies. A carefully balanced session of bluesy, cinematic atmospheres bolstered by old school avant-garde traditions, Old Idea looks to the past while forging headlong into the future.