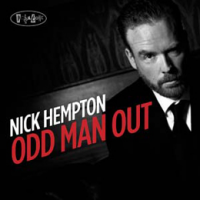 So, just who is the Odd Man Out? It's not exactly one of the great enigmas of modern times, but it's something to ponder. Not for too long, though, for time will be much better spent enjoying the music. Odd Man Out is the third album from saxophonist Nick Hempton and his band and it represents a notable step forward for what was already an impressive and hugely enjoyable ensemble.

So what's changed since Hempton's second album The Business (Posi-Tone Records, 2011)? In many ways it's business as usual on Odd Man Out: same label, same band, same straight-ahead, swinging, approach, same combination of originals plus two covers. Hempton is once again staring out from the right side of the cover, although he now sports a neatly-trimmed beard and a quizzical eyebrow. But there's a bit more stylistic breadth, a few extra surprises, on album number three.

Trombonist Michael Dease is a very welcome guest. Paired with Hempton's tight, dry saxophone tone Dease's open, warm trombone really helps to enrich the sound, whether it's on up-tempo numbers such as "Nice Crackle" or slinky groovers like "The Set-Up," which also features a good-humored Dease solo.

Duke Ellington and Billy Strayhorn's "Day Dream"—written for alto saxophonist Johnny Hodges—proves to be a terrific vehicle for Hempton's more considered and reflective side. The ballad is a duet between Hempton and Art Hirahara, with the pianist providing a beautifully judged accompaniment to the saxophonist's melodic interpretation of the tune. Hempton's own "Nights And Mornings" offers another chance for him to show his skills as a balladeer, this time on a film-noirish tune full of images of rainstorms and lonely streets.

There are some odd little twists, too. "Five Ways Through Harsimus Cove" sounds at first as though Hempton's soundtracking the progress of a cat burglar in a '60s crime caper. "A Bicycle Accident" has an improvised feel, resolving gradually to the album's more characteristic straight-ahead sound then pausing briefly before kicking in with a selection of moods and grooves—a little Latin, a spot of R&B—and eventually ending with the plaintive sound of Dan Aran's cymbals.

Randy Newman's "Blue Shadows" (from the 1986 movie Three Amigos) adds a bit of country to the mix. Marco Panascia's jaunty bass line and Aran's rat-a-tat percussion set things up for a Roy Rogers vocal, so it's almost a surprise when Hempton's saxophone enters instead. Although it would probably be even more of a surprise if Rogers did suddenly burst into song.