Marco Panascia (pronounced: pana-SEE-ah) is an Italian-born bassist, composer and educator living in New York City since 2002, and a recently minted U.S. citizen. His proficiency in many different musical situations and settings, and his strong doubling skills on the acoustic and the electric basses have earned him wholehearted praise worldwide. Panascia has made a name for himself by being featured in the groups of several jazz luminaries, such as Kenny Barron, Andy Bey, Kevin Mahogany, Eric Reed, Dado Moroni, Alvin Queen, Bobby Watson, Peter Bernstein, Tamir Hendelman, Claudio Roditi, and David Kikoski, and by regularly appearing in some of the world's top music festivals and venues, such as the Montreux Jazz Festival, the Hollywood Bowl, and the Kennedy Center for the Performing Arts. Panascia is also known for his tenure with young jazz piano sensation Eldar, which delivered sold-out performances in three continents, and culminated in two celebrated CD releases on the Sony BMG Masterworks label: “Live at the Blue Note”, and “re-imagination”, which received a 2008 Grammy nomination for Best Contemporary Jazz Album.

Mentored by Los Angeles studio legend Carol Kaye and by classical bass maestros Nello Nicotra and Betram Turetzky, Panascia was the first prize winner of the 1998 Edinburgh International Double Bass competition in Scotland. After moving to the United States, he went on to earn a Bachelor of Music degree from the Berklee College of Music in Boston, and a Master of Music degree from the Manhattan School of Music in New York City, as a full tuition scholarship recipient. Currently an adjunct faculty member at the New School University in Manhattan, he often gets invited to teach clinics and masterclasses in the United States and abroad. Recent teaching stints have included the Rochester Bass Retreat and the Tritone Jazz Fantasy Camp at Nazareth College in Rochester, New York; the SC Double Bass Conference at the University of South Carolina in Columbia, South Carolina; the USU Guitar and Bass Festival at Utah State University in Logan, Utah; and the Bass Fest at the State University of New York in Fredonia, New York.

Panascia's performance credits on acoustic and electric bass include some of the most highly regarded artists on the contemporary jazz scene and beyond, such as Lee Konitz, Joe Lovano, Dave Liebman, Roy Hargrove, Chris Botti, Gary Burton, Seamus Blake, Peter Erskine, Adam Nussbaum, Greg Hutchinson, Lewis Nash, Matt Wilson, Victor Lewis, Nasheet Waits, Helen Sung, and Francesco Cafiso. In the pop and R&B fields, Panascia has performed with Natalie Cole, Patti LaBelle, Jennifer Holliday and Brian McKnight, among others. Whenever he has time off from his hectic worldwide touring schedule, Panascia can be heard performing in some of New York's most celebrated venues, as a leader of his own group, or as a sideman with several world-renowned musicians on the scene. As further indication of Panascia's freelancing abilities outside of the jazz world, he has been subbing regularly for legendary bassist Tom Barney on Disney's “The Lion King”, Broadway's third longest-running show in history and the highest grossing Broadway production of all time, and he has been one of the featured bassists on the groundbreaking Off-Broadway show “Sleep No More” between 2012 and 2017. In 2019, Panascia also started subbing for bassist extraordinaire Michael Olatuja on “Frozen”, another successful Disney production on Broadway. Panascia is also a first call accompanist on the New York cabaret and singer-songwriter music scenes, and he mantains a strong presence on social media, with a dedicated channel of video bass performances on YouTube that has amassed over 1,200,000 views since its inception.

Aside from being featured as a sideman on more than 50 recordings, Panascia's first album as a leader, “Bass Duo Live”, was released in 2014, and it documents an unedited live concert with Dario Deidda, one of Italy's most celebrated jazz musicians, on a swinging and highly conversational acoustic/electric bass duo performance. The album is available on CD Baby, iTunes and Bandcamp, both in physical and digital form. 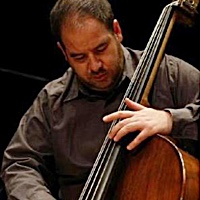 All About Jazz musician pages are maintained by musicians, publicists and trusted members like you. Interested? Tell us why you would like to improve the Marco Panascia musician page.