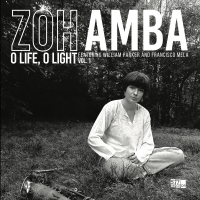 Since relocating to NYC from Tennessee, twenty one year old tenor saxophonist and flautist Zoh Amba has been keeping fast company. On her debut O Sun (Tzadik, 2022), in a sign of affirmation label boss John Zorn guests on one track, while O Life, O Light continues in the same vein as she helms a heavyweight trio comprising celebrated bassist William Parker and storied drummer Francisco Mela. Amba studied with David Murray, but her sound owes more to the raw expression of one of his early influences, Albert Ayler, particularly in her simple folk-inflected themes and emotionally drenched figures nuanced with husky distortion, and given additional heft through insistent repetition.

The opening "Mother's Hymn" establishes the template as Amba's songlike four note motif is undergirded by Parker's bowing and Mela's mallets, crafting a ritual feel, albeit laced with sadness. Thereafter she alternates a rough hewn lyricism with inchoate blurts in a unhurried mesmeric stream, creating a winning contrast with the scurry of Parker's throbbing pizzicato and Mela's buoyant rolling cadences. Parker is in his element here, unsurprising given his experiences with fire-breathers such as Peter Brötzmann and John Dikeman, forging a sinewy thread which both moves things forward and holds it all together.

Mela's rhythms dance, at the same time as he embellishes and decorates the pulse. His attention to timbre is such that he even evokes the tonality of steel drums from his native Cuba during some of the bass/drum interludes. In a change of intensity, his jangling percussion introduces "Mountains In The Predawn Light" in combination with Parker's bass harmonics and Amba's breathy flute, alluding to the serenity of the title. But as the piece progresses, they reverse the norms. Amba's emphatic flute continually flits and alights on melodic phrases, while bass and drums circle in measured waves. The final "Satya," a pithy coda at less than two minutes, revisits the incantatory territory of the opener, erupting into some of Amba's most animated overblowing of the set, before winding down almost as quickly as it arrived.

Wherever Amba goes next looks likely to be a ride worth hitching.