By JEFF STOCKTON
October 20, 2003
Sign in to view read count 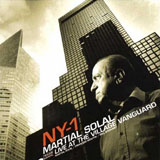 Opening night for pianist Martial Solal's rare appearance in New York City was scheduled at the Village Vanguard for September 18, 2001. The show went on, but because the city wasn't too much in the mood for enjoyment, and Solal had had trouble making the flight. That first night he performed standards to a sparse but emotionally hungry audience, as if the familiarity of those selections would serve the moment, musically and psychologically. The beauty and perfection of Solal's playing was what the audience craved.

NY-1 is culled from subsequent performances later in the week, and as the audiences grew larger, Solal's trio with bassis Francois Moutin and drummer Bill Stewart became less tentative and more experimental than they were on that first wary night. Alternating between standards and original compositions on the CD, the title track kicks things off with skittering drums and briskly plucked bass while Solal stops-and-starts in a torrent of notes. He rejects convention by going as far outside the meter as he can without leaving his rhythm section behind, while never completely abandoning melody.

Cole Porter's three-minute original "What is This Thing Called Love" is a vague memory as the trio swings it for 14 bars with Moutin taking a long bass solo, his sound suggesting the plinking of a cello. The slow-drag beat of "Body and Soul" is more immediately recognizable, with Solal accelerating and braking to fill the spaces, as is "Softly as in a Morning Sunrise," which concludes with a precise, dramatic piano flourish.

"Suspect Rhythm" is the centerpiece original, offering an intensity that's a level higher than the other tracks. The musicians are clearly listening to and pushing each other, and Solal seems to hit the keys just a little bit harder. They pause for a lovely passage of arco bass and Solal-ian elegance, then shift yet again to a bluesy beat.

A part of me wishes NY-1 was a document of opening night, when so much was at stake, but I know that would be a disservice to Martial Solal. He and his trio create music that soothes the soul, under any circumstance.

NY-1; What Is This Thing Called Love; Suspect Rhythm; Body and Soul; Zig Zag; Softly, As in a Morning Sunrise; Lombardy.