Glenn Patrik: Nuthin' But a Thang! 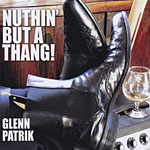 From America's heartland, Glenn Patrik sings and plays the kind of blues that made Kansas City a hub where musical pioneers met and exchanged ideas about swing, rhythm, blues, and being spontaneous. It was shortly before World War II and just about the same time that bebop was getting noticed in New York, when Kansas City began its parlay with the blues. Give Charlie Parker credit for much of that early action along with Big Jay McShann, but don't forget the contributions that Bennie Moten, Hot Lips Page, Count Basie, and Jimmy Rushing had on this blues style that married with jazz. Big Joe Turner and dozens of noted singers led the way too, as bluesmen from all over the country traveled through town on the way to New York, Chicago or elsewhere.

Born and raised in Kansas City and a part of today's generation of bluesmen, Patrik carries a genuine hometown swing with his message, allowing the band to ooze comfortably with its rhythmic wave and to cover the territory with finger-poppin' charm. He sings with authority and fills on guitar while coordinating with bass, keyboards and drums in a laid-back affair. Together, they create an atmosphere where blues reigns supreme and Kansas City lends its influence. But there's a lot more going on here, including bits and pieces that Patrik has absorbed from listening to a variety of artists such as Aaron Neville, Jimmy Reed and B.B. King.

On the track "Kansas City," Patrik establishes a swing mood, slows it down considerably for "The Bossman" blues, and delivers "Thang Thang" with funk-driven James Brown energy. Elsewhere, he drives through a field holler, some contemporary blues, and several moaners where he exhibits clear mastery of the guitar. Patrik turns passion into heartbreak and rolls over swing things with a comfortable ease. He's at his best with soulful ballads such as "Friend of Mine" where his sincere approach pays off with meaningful agreement and a cohesive blend that leaves a powerful message.

Don't Call Me Daddy; Don'tcha Know; Kansas City; The Bossman; One More Day; 4 P.M. Blues; Too Blessed to Be Depressed; Thang Thang; Friend of Mine; Last Night; Other Side of Town.