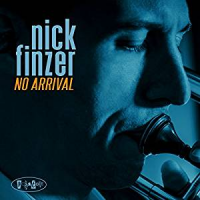 To say a musician has arrived is to create the ultimate paradox. For in that notion is the suggestion of reaching the upper echelon in the art form, but also an indication of the end of a journey and the start of stagnation. With the true seeker and master musician, there is no arrival; there's merely the act of moving forward, and trombonist Nick Finzer is keenly aware of that. While he's certainly come into his own over the past several years, Finzer isn't one to adopt such an idea as arrival. He's all about growth mindset, and that's why he continues to impress and evolve.

On his first date for Posi-Tone, Finzer fronts a sextet of his peers on a program that showcases his chops, taste, pen, and panoramic outlook. He never repeats himself, yet everything seems to be of apiece. The opening coupling perfectly makes that point. "Rinse And Repeat" is all optimism, as Finzer creates a musical depiction of day-by-day life as the ultimate mulligan. Then, with "Never Enough," he subscribes to realism and reflection, addressing mortality with pensive purity. Both songs stand brilliantly on their own, but each also proves complementary to the other.

As the album continues, Finzer adds more quality originals. But of greater note, he also finds a way to honor his influences without taking a step backward. With a personalized take on Leonard Bernstein's "Maria" he addresses the grip that West Side Story had on his heart strings from an early age, through a waltzing take on George Gershwin's "Soon" he honors trombone icon Curtis Fuller, on Duke Ellington's "Pyramid" he rides and glides atop a double-time bass line while shining light on his bandmates and this under-heralded gem, and in "The Greatest Romance Ever Sold" he tips his hat to the composer and the artist who's work introduced him to the song—Prince and Maceo Parker, respectively. Then the curtain comes down down with an inflection-rich take on Billy Strayhorn's "A Flower Is A Lovesome Thing" that's as much about the man behind the music as it is about Ellingtonian trombone forebearers and mute masters like "Tricky Sam" Nanton.

While Finzer most certainly deserves a good deal of praise for this one, it would be hard to understate the importance of the contributions from the rest of his crew. Lucas Pino's tenor saxophone and bass clarinet are stylishly indispensable, Victor Gould's piano glistens while getting to the heart of an idea, Alex Wintz's articulate guitar threads its way into all the right spaces, Dave Baron's bass bolsters this band from below, and Jimmy Macbride juices up the grooves, be they swinging or suggestive of other ideals. On No Arrival, man and band work off the same page. That sense of unity is but one of the many virtues of this date.

Rinse And Repeat; Never Enough; Maria; Tomorrow Next Year; Soon; No Arrival; Pyramid; Only This, Only Now; The Greatest Romance Ever Sold; A Flower Is A Lovesome Thing.