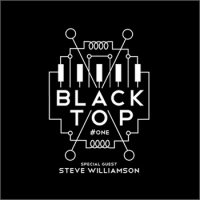 No. 1—the energetically contrapuntal debut album by the duo Black Top—is, in reality, a trio endeavor. UK based multi-instrumentalists Orphy Robinson and Pat Thomas have been a frequent presence in the London club scene, sharing their live performances with a host of up and coming UK artists. Among them, saxophonist Steve Williamson is the most well established having recorded with vocalists Abbey Lincoln and Cassandra Wilson as well working live with Courtney Pine, Iain Ballamy, and Archie Shepp. Williamson joins Black Top in what is surely the most improvisational recording work of his career. The marriage of Robinson and Orphy's Afro-Caribbean influenced improvisations and Williamson's jazz-funk-traditional roots make for a highly effective collaboration that is unique in its totality.

No. 1 consists of three original pieces, of which the first two account for almost forty minutes of the album. "There Goes the Neighbourhood" opens to Willamson's tenor weaving long serpentine lines. The dark ambience is punctuated with sporadic marimba from Robinson which varies from being synchronous to somewhat disembodied from the sax. Thomas's piano adds a percussive tautness to the piece, often trading places with the marimba and at other times playing in such close proximity that the two become extensions of each other's natural characteristics. The electronic components added by both Robinson and Orphy create a colorful kaleidoscope of sound.

With its sweeping interconnectivity "Guess Who's Coming to Dinner" maintains a core theme—but just barely— as the players race around it carrying everything in their instrumental cache. Thomas leads the chase, romping inside-out through the melody, touching briefly on Latin influences and eventually flaying the keyboard without ever losing complete site of the fundamental phrasing. Robinson, now on vibes, paints colorful and intricate patterns while eccentric electronic cadences drive the forward momentum of the piece. The relatively brief closer, "Archaic Nubian StepDub," features cyberpunk rhythms, playing off Williamson's subdued jazz-funk dialect.

No. 1 has the sound of a bigger band thanks to the musical diversity of Robinson and Orphy. It is all the more remarkable that this is a live recording and conjures the image of the two musicians frantically multi-tasking to keep up the pace. Yet in the music there is no sense of frenzied activity. Despite the persistent concentration of electronic rhythms, these pieces have the forceful dignity and beauty of a Jackson Pollock painting. Black Top manages to successfully blend compatible freedom of expression with measured grace. As a result, No. 1 is something very different and very rewarding.

There Goes the Neighbourhood; Guess Who's Coming to Dinner; Archaic Nubian StepDub.