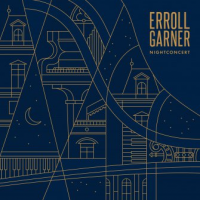 It's the jazz equivalent of finding a Van Gogh or a Ming vase in the attic: the discovery of a complete, perfectly-recorded 1964 concert by one of the music's greatest virtuoso solo pianists. In the beginning was Art Tatum. Then came Oscar Peterson. Finally—and in many ways the most interesting of the holy trinity—Erroll Garner.

Garner was famed for his long, rambling introductions. In a section of the liner notes jazz historian Professor Robin D. G. Kelley writes, "His signature introductions left audiences—not to mention his own sidemen—in great anticipation of what was to come. He was prone to meandering, rubato introductions that initially bear little resemblance to the song or the key, before suddenly leaping into the melody."

They have to be heard to be believed and—to be honest—can become irritating. Many modern listeners may find themselves longing for the "less is more" approach to jazz piano taken by the likes of Ahmad Jamal. But Garner was at his peak for this midnight concert before an audience of 2,000 in the Royal Concertgebouw, Amsterdam, on November 7, 1964.

In the event, as Professor Kelly puts it, the trio "rocked the 76-year-old concert hall like there was no tomorrow."

Writing in The New Yorker, critic Whitney Balliett said, "Garner's appeal stems from his style which is rococo and eccentric, and from the easily accessible flash, geniality, and warmth that continually propel it."

Those words conjure up a magical age when jazz was still unfolding, rock was yet to be born and Garner's Concert By The Sea was the cornerstone of any self-respecting record collection. That classic album now has a worthy companion, blessed with all the aids of modern technology. A collector would have difficulty choosing between them.

The program is pretty typical, most of it standards, kicking off with "Where Or When" and continuing with Cole Porter's "Easy To Love." There's "On Green Dolphin Street" from 1947, composed for a film, which Miles Davis converted into a jazz classic. More interesting are Garner's versions of "Cheek To Cheek" and "My Funny Valentine," in which he doffs his cap to what was then the avant-garde and the swinger "Gipsy In My Soul," which he made his very own.