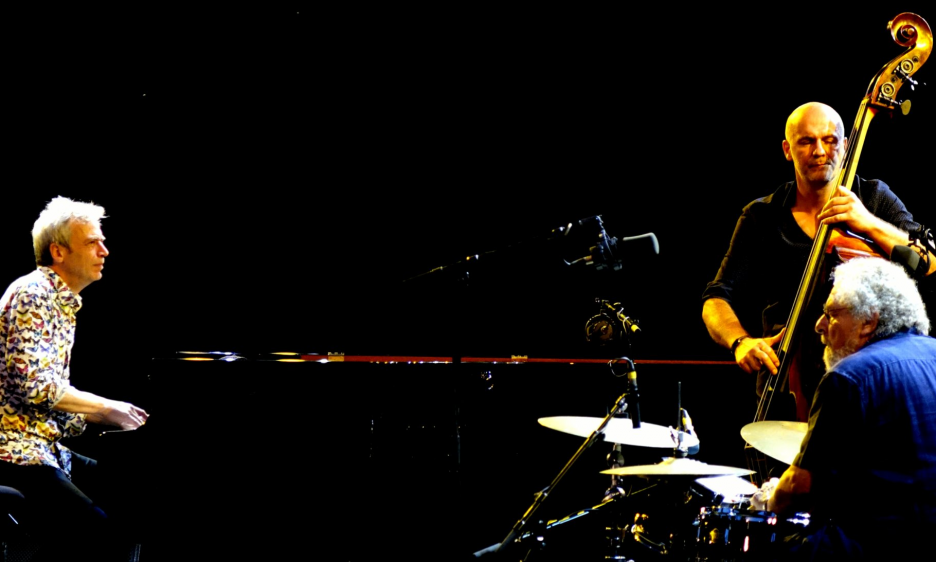 The 2018 Nice festival started like a damp squib when a crashing, flashing thunderstorm hit the city an hour before the opening. The ensuing deluge made the stages and electrics unsafe. With no chance of rescheduling, most musicians left town for their next gig and the first night was cancelled. The ambassador of the Festival Gregory Porter delayed singing his tribute to Nat King Cole by a day, giving a free concert late Tuesday night. It would have been interesting to hear live the guitar of Kyle Eastwood who has appeared in films produced by his father, actor, director and jazz aficionado, Clint Eastwood.

With time to spare, the question of the amount of jazz content in jazz festivals came to mind. When instrumentalists led jazz away from lyrics, melody and dance rhythms in the 1950s, the young section of the audience took their money, their dance moves, their love songs and turned to the Blues side. They found R+B and Rock waiting for them, then Soul and Tamla Mo'town developed and The Beatles sealed the deal. Blues related music became more financially successful and enduring across generations than jazz. (US recording sales 2012-Rock $102m/R&B $49.7m/Jazz $8.1m). Jazz evolution has no reverse gear but Jazz Festivals need commercial music to pay the bills. Played well, nothing is right or wrong it's all music, and in Nice, six bands every night for one price means a choice of music.

On Tuesday, July 17th, both stages were back in action. The smaller 2,000 seated outdoor stage area generally presented jazz, the larger 8,000 standing capacity stage other genres. There was a half hour overlap so It was possible to catch some of all six bands each night.

A group called "Caja Negra" took the smaller stage. The guitar was played high in a classical position but not flamenco style with two scat singers hand clapping palmitas in the rhythmic counterpoint Spanish gypsy way. The underlying sound wandered between Southern Spain and the Arabic music of North Africa using two percussionists, stand up bass, piano, guitar and the band leader Pierre Bertrand on alto saxophone. M. Bertrand composes, plays and also leads the Nice Jazz Band. This was a free concert but on the main stage people paid to hear straight Soul music from Derobert and the Half Truths, in from Nashville, TN. Derobert has a smooth rounded voice trained in church. The whole group worked hard to build the energy on a hot and sultry night. The standing audience swayed, danced and applauded.

On Wednesday, singer Camile Bertaud took the smaller stage for her almost entirely scat performance with a jazz trio. A pianist herself classically trained at the conservatoire in Nice, Ms Bertaud showed the range of her voice in scat versions of music by Bach and Ravel and a homage to Eric Sati, titled "Sati, are you satisfied"? On the same stage, the treat for the evening was The New Monk trio featuring Eric de Wilde on piano with bass and drums(pictured). M. de Wilde wrote an autobiography of Thelonius Monk and has extensively researched the music. They opened with "Misterioso" befitting Monk's mysterious and sometimes contrary character as portrayed in "Monk's Mood" and they ended with a slow version of "Locomotive." In their presentation of "Friday 13th" M.de Wilde demonstrated how a theme of just four measures turned into an 11 minute recording. Soul for the evening was delivered enthusiastically by Deva Mahal and her band, her power and energy direct from church gospel, the trademark of soul singers. There was pithy urban poetry from French rapper Orelsan and the main stage was filled with musicians and dancers for a spectacular of Afrobeat music from saxophonist Seun Kuti and Egypt 80 following in the footsteps of his father, Afrobeat pioneer Fela Kuti.

Thursday, pianist Baptiste Trotignon and saxophonist Yosvany Terry journeyed through the French Caribbean islands but those rhythms were not immediately obvious until their last piece "Ancestral Memories" at the end of which they paraded off the stage still playing, and faded out. Next, Melanie De Biasio sang what at first blush was a monotone dirge but listening more carefully, fragile sentiments appeared wound into the music as her melifluous flute worked it's magic. Gary Clark, Jr. from Austin Texas enthralled the audience from the start, singing authentic blues and playing long solo riffs. He filled the standing space. Some tunes had a soul bias in his voice but the performance was clearly top quality blues and the audience yelled their approval.

On Friday Jef Roques Quartet, winners of last year's Springboard competition, featured some fine guitar by the leader, tending towards bebop, including long riffs in his own compositions. They played a slow "That's all" from " It had to be you" to great effect contrasting with his faster pieces. The treat on Friday was Rhoda Scott playing the unmistakable Hammond B3 organ, and playing the pedals barefoot. She was joined by The Lady Band, Sophie Alour on tenor saxophone, Lisa Cat-Berro on alto saxophone and Julie Saury on drums. They played original compositions by the two saxophonists, and a beautiful version of "Que reste-t-il de nos amours" (I wish you luck) before tearing the place up with some Miles Davis and getting two standing ovations and an encore. They stayed close to the melody often in powerful unison, a group of exceptional musicians and ladies. Saturday and the last day. Eric Legnini on piano gave his tribute to Les McCann and his 1960s soul jazz style, basically a classic trio plus trumpet and sax. "Big City" was a moody, gentle after midnight ballad typical of the style. Finally, roll back the Steinway here come the Manouche, fiery gypsy jazz musicians. Trio Rosenberg, all cousins, played their theme tune "Sephora" and a Django piece, "Festival '48" a perfect fit for the year Nice Jazz Festival was inaugurated. Their encore was the beautiful "Nuages." They play easily together, in a clear, precise and simple way, no more notes than are needed and every one of them delivered perfectly.

Festivals are a different atmosphere than clubs or concerts and mixed music means mixed audiences. The two stage concept gave depth and variety, by some too easily opposed and disregarded because we all have our predetermined preference... but Vive la Difference!