SOURCE: ALL ABOUT JAZZ
November 14, 2018
Sign in to view read count 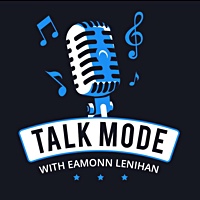 slideshow
“Duke Ellington reckoned ‘Too much talk stinks up the place’. And of course it must be about the music. But sincere, intelligent conversation can lead to enlightenment. My role, as podcast host, is to steer guests away from bland, chat show patter into areas of genuine interest…” —Eamonn Lenihan

Talk Mode, the very first podcast by broadcaster Eamonn Lenihan, launched on November 2nd. It’s a series he feels will appeal to seasoned jazz lovers and newcomers alike. Exclusive interviews will be available every Monday, Wednesday and Friday. Pitched to listeners with a basic knowledge of jazz, Eamonn will always try to bring along those new to the music. Either way, it should be a true journey of discovery. The conversations with invited guests provide opportunities for informed opinion, useful information and one or two anecdotes. Plenty of success stories can be heard, obviously, as well as some of the struggles endured by artists. Already, guests have been lined up from USA, the UK, mainland Europe, Cuba, Australia, India and Armenia.

The show’s duration—roughly 30 minutes—allows guests enough time to open up and relax, reveal things they might not normally speak of.

“The Andreas Varady episode should be a particularly interesting one for yours truly,” Eamonn says. “I remember him as a small boy busking close to the radio studio I worked from in Limerick city. Back then, I was the guy from the Irish state broadcaster with loose change in his pockets. Today, Andreas is the virtuoso guitarist managed by Quincy Jones. The power balance has shifted just a little.”

During his time with RTÉ, Eamonn created an astonishing output of specialist music radio: something in the region of 7,000 hours. The job was, he says, “a labour of love, particularly since I was largely left to my own devices. But I didn’t take a single weekend off in 14 years. I’ll not make such a lifestyle choice again.”

The podcast is Eamonn’s way of staying within jazz, whilst exploring new horizons from his home studio in Ireland. And it’s not merely about talk. At the end of each month, music playlists will be made available to subscribers, many of the selections being the personal choices of those who’ve appeared on the programme.

Established and emerging jazz acts will feature, along with composers, arrangers, label heads, media folk and the occasional wildcard. “I’m due to chat with Jethro Tull’s Ian Anderson in December,” Eamonn says. “That should be interesting…”

The series is out now.

An experienced presenter with the Irish state broadcaster, RTÉ, as well as an approved independent producer with the BBC in London, Eamonn established the “Talk Mode" podcast in November 2018, in order to share the best jazz with a global audience...