The Stephanie Jordan Big Band will engage the audience with her signature sound of jazz standards from the Big Band era. The show will include highlights from the “Stephanie Jordan Sings A Tribute to the Fabulous Lena Horne” CD which honors the legendary Grammy Award winner who also starred in many films.

Jordan said, “It is fitting that we honor Ms. Horne during Black History Month, in addition to being a great performer, she was also known for her work in the Civil Rights era. Horne was applauded by many for refusing to play roles that stereotyped African-American women. She performed at rallies around the country on behalf of the NAACP, National Council for Negro Women, Delta Sigma Theta sorority, Urban League, and was very involved at the 1963 March on Washington. Lena Horne even spoke at an NAACP rally with Medgar Evers in Jackson, Miss. the weekend before he was assassinated.”

By the end of the 1940s, Horne had sued a variety of restaurants and theaters for discrimination and become an outspoken member of the Progressive Citizens of America. McCarthyism was sweeping through Hollywood, and Horne soon found herself blacklisted. Since she was unable to work in film, television, theater or recording, she performed primarily in posh nightclubs around the country. The ban eased in the mid-1950s, and Horne returned to the screen in the 1956 comedy Meet Me in Las Vegas (Source: Bio.com).

According to Horne’s Kennedy Center biography, “she refused to perform for segregated audiences or to groups in which German POWs were seated in front of African American servicemen." She was, as well, outspoken when she met with prominent officials—including First Lady Eleanor Roosevelt—about the need to pass anti-lynching laws. “It is that steadfast approach in the quest for equality which inspires me as I move forward. As performers it is imperative that we recognize our role and responsibility to help shape society and affect public policy” adds Jordan.

Stephanie says that it was actually “Lena Horne who served as her first introduction to great jazz singers. As a little girl I wanted to be Lena Horne." The back story starts in the spring of 1983, when Horne visited New Orleans for the third and final time, bringing her one-woman show to the Saenger Theater for several weeks. The contractor was Jordan's father, Edward “Kidd" Jordan-best known as an outcat improviser who navigates the interstellar spaces of late period John Coltrane, but also a distinguished educator and first-call session musician. He procured tickets for his family.

“I have witnessed hundreds of performances, by a lot of big-name singers and that one never left me. Lena Horne showed what it meant to take command of a stage," says Jordan.

Noted jazz critic Ted Panken writes, “Great lyrics permeate this beautifully rendered homage, and Jordan has the skill sets to do them justice—a voice that projects from a whisper to a scream, impeccable diction, dead-center pitch, fluid phrasing…, she finds fresh, unfailingly swinging approaches to this well-traveled repertoire, melding into a personal argot elements garnered from such distinguished mentors as Shirley Horn, Abbey Lincoln, Nancy Wilson—and Lena Horne herself—while sounding like no one other than Stephanie Jordan. As she aptly puts it, “it’s a tribute, not a copy.”

Following her performance with the Chicago Jazz Ensemble where Stephanie served as a late minute replacement for Grammy Award-winning singer Ledisi, Chicago Tribune’s leading art critic Howard Reich proclaimed, “The woman can sing and indisputably knows how to reach out across the footlights... bringing heft to music of the Gershwins and Cole Porter without pushing volume levels. Clearly she values plush sound and knows how to produce it.” Music critic James Walker added, “Stephanie Jordan... stepped in and simply mesmerized the near capacity Harris Theater crowd with a sparkling performance that surely put her in good stead with the astute Chicago audience...“

Bill Milkowski of JazzTimes Magazine said of her Jazz at Lincoln Center performance; “Stephanie Jordan, a standout here, was the real discovery of the evening. Her haunting rendition of (Here’s To Life) this bittersweet ode associated with Shirley Horn was delivered with uncanny poise and a depth of understated soul that mesmerized the crowd and registered to the back rows. Singing with clarity of diction that recalled Nat “King” Cole...”

The Washington Post boasts of her Kennedy Center performance, “Contributing intimate and thoroughly enjoyable interludes were... A poised, soulfully articulate vocalist, Jordan turned in a performance that warmly evoked the influence of Abbey Lincoln, Shirley Horn, Carmen McRae and other jazz greats.”

Ms. Jordan is the fifth performer to emerge from a family of New Orleans bred musicians. As the daughter of renowned Avant-jazz saxophonist and teacher Edward “Kidd” Jordan, Stephanie’s musical roots run deep. 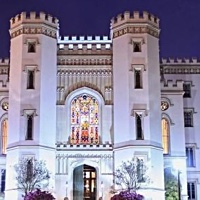