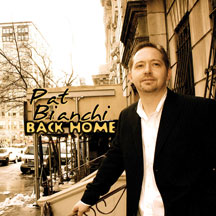 slideshow
New York City based jazz organist Pat Bianchi will be releasing his sophomore recording entitled Back Home on the Doodlin' Records label. It will be available nationwide on July 13, 2010.

Following the success of his first CD, East Coast Roots, released on Jazz Media, Bianchi's Back Home continues to showcase a different repertoire than that usually associated with the Hammond B3. On this recording, he performs compositions of Chick Corea, Ornette Coleman and John Coltrane among others.

This CD features some of the finest musicians in Jazz today including, drummer Ralph Peterson, saxophonist Wayne Escoffery and Terell Stafford on trumpet. “Back Home" also includes tracks that showcase Bianchi in a trio setting featuring drummer Carmen Intorre and guitarist Gilad Heksleman.

Bianchi, a native of Rochester, NY has performed extensively since the age of twelve. His formal studies include classical piano and theory at the preparatory department of The Eastman School of Music (Rochester, NY) and earned a Bachelor of Music in Performance degree at The Berklee College of Music. (Boston, MA)

One of Pat's most important influences was Joey DeFrancesco and his Columbia Records release Live at the Five Spot. Pat said: “After hearing that CD and listening to it non-stop, I knew I wanted to play the organ and it became my goal to figure out how to play it like him! Years of continuous, intense study and his long time apprenticeship with DeFrancesco have paved the way for Bianchi to achieve many milestones in his career.

While living in Denver, Pat released his first CD as a leader featuring guitarist Mark Whitfield and drummer Byron Landham. This impressive debut recording gained large amounts of attention on the airwaves across the U.S. appearing for over 8 consecutive weeks on the Jazz Week national radio charts and was voted by many Jazz radio stations as one of the top Jazz CD's of 2006. East Coast Roots, distributed by the Jazzed Media record label, continues to receive consistent airplay and glowing reviews worldwide.

Currently residing in New York City, Bianchi is involved in many projects and continues to propel his musical career forward. He maintains an active national and international touring schedule, both with his trio featuring drummer Carmen Intorre and as a sideman. In January 2008, Pat was invited to become a member of the Joey DeFrancesco Trio, playing both keyboards and organ alongside his mentor. Also, Pat was a featured performer on saxophonist Tim Warfields recent release, One For Shirley as well as Warfield's upcoming Criss Cross release, Sentimental Journey.

Pat's sophomore release entitled Back Home featuring musicians such as Ralph Peterson, Terell Stafford and Wayne Escoffery will be released on the Doodlin Records label in July 2010. Pat has also partnered his talents with renowned drummer Ralph Peterson Jr. in paying tribute to the innovative jazz organist Larry Young. Bianchi co-leads The Unity Project with Peterson.

With renewed interest and the advent of several artists in recent years, the genre of jazz organ continues to grow in popularity with audiences worldwide. Pat Bianchi is considered by not only his peers, but also his mentors as the next organist to make a mark in the world of jazz.