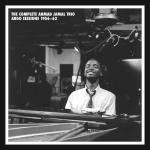 The mid fifties was a fertile time for jazz; fresh, original ensembles were taking shape all over the country. The Modern Jazz Quartet, the Dave Brubeck Quartet, The Jazz Messengers and the Ahmad Jamal Trio immediately come to mind. Among musicians, each group had its imitators and its creative disciples who took its innovations one step further.

But no group in this era was as pervasive in the 1957 incarnation of Jamal's trio with bassist Israel Crosby and drummer Vernel Fournier. Like the Nat King Cole Trio of the previous decade, its influence penetrated so many different aspects of music.

Jamal is first and foremost a pianist with a natural gift for the instrument. His technique, dynamics and control are something to behold, but the mind that manipulates what comes out of the piano is extraordinary. Like only the greatest of improvising artists, Jamal is a master architect, realizing what his mind conceives with seeming ease.

He certainly exercised a profound influence on pianists and his trio set a new standard for what the piano trio in jazz would aim for and achieve. His knack for finding obscure but viable material which lent itself to a jazz treatment was equal to that of Sonny Rollins and Jimmy Rowles. But when Ahmad put an overlooked tune into circulation, it often stayed in the jazz repertoire forever thereafter. And with songs like “Poinciana" and “Billy Boy," it was Jamal's unique and imaginative re-arrangement of the tune which would become the standard form with which to play the piece.

Much like Miles Davis (who incidentally was greatly influenced by him), his influence is felt in music that attempts to replicate his and in great music that sounds nothing like his. But unlike musicians of similar or even lesser impact, the music of the 1957-62 Ahmad Jamal Trio has been mysteriously and distressingly hard to come by, even in the “reissue everything" era of the Compact Disc.

Literally years in the making, this set introduces 23 previously unreleased gems approved by the artist himself. It was delayed by problems finding much of the original Jamal trio LP masters and our search to reconstruct the music on the set from a variety on analog and digital sources sitting in vaults around the world.

It's been a hell of a long time coming and we hope you enjoy The Complete Ahmad Jamal Trio Argo Sessions.

Let's Fall In Love | We Kiss In A Shadow