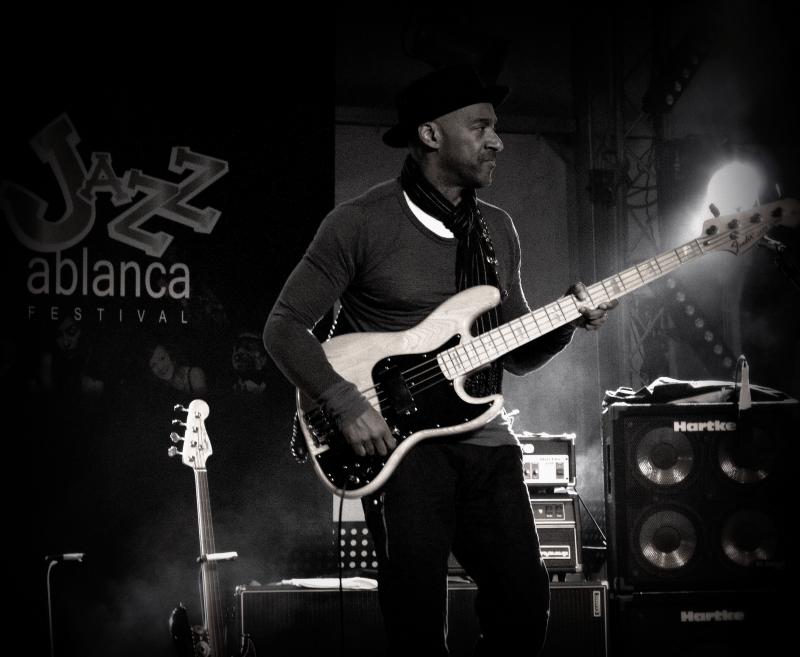 A number of great American jazzmen have visited Morocco to play in the numerous jazz festivals organized throughout the year, to name Archie Shepp,Randy Weston,Roy Hargroove,Peter Cincotti and many other American figures who made their stamp on Jazz History. This time was Marcus Miller's turn to tread Jazzablanca's stage on a memorable evening that enthralled connoisseurs, amateurs, and fans.

In the midst of the applause and the standing ovation, Marcus explained that it's the first time he is to play in Casablanca and that hopefully it won't be the last.

The unique slapped bass burst out with the first funky track made to present the sextet. Alex Han was on the saxophone, the young Luis Cato on drums, the Thelonious Monk award winner, Kris Bowers on Piano, the talented Adam Agati on guitar, and the fireball Maurice Brown on trumpet.

On a first visit, Marcus as the orchestra man tried to play a bit of everything, old songs, new unreleased songs of his upcoming album Renaissance, classics like “Tutu," remakes such as “Get up Stand up," and improvisations on the spot. The stage was a musical lab tested by a wide audience more impressed and content than critical.

Every song exhibited the mastery of Marcus to merge different styles ranging from Funk, swing, smooth jazz, passing by pop. You could feel Miller's presence directing his band and giving the floor to solos; Maurice Brown's extended perky and fast blows were often replied by Alex Han vibrating and inextricably deep solos, while the rocking part was switched on by Adam Agati on guitar; on the other hand, Kris Bowers made it possible for the sextet to pause for smooth jazz attended by Marcus's bass. Improvisation was naturally ubiquitous: long echoes between Luis Cato and Marcus Miller were part of the show; the two musicians went further as to attempt a rendition of Moroccan sounds akin to Gnawa music. From time to time, Marcus paced the stage to attend to Maurice who delved in never ending solos that he cut with slapped bass and tapping to restore the refrain. Maurice was definitely the man to watch on stage!

Among the highlights was the sextet's rendition of Bob Marley's “Get up Stand up." The sextet combined funk, ska, and rock to come up with a highly extravagant version of Marley's masterpiece. The brass instruments boosted the refrain that part of the audience echoed with lyrics. Marcus surprised further with two tunes from his upcoming album “Revelations" and “Nocturnal Mist." Quite melodic, “Revelations" reveals to the public a novel aspect of Marcus's ability to transcend funk and to offer enamoring oriental solos that Alex Han interprets with mastery. Nevertheless, the slapped sound comes to the surface as usual to stamp Marcus Miller's style.

The concert concluded with the famous 'Tutu' which Marcus composed for Miles Davis and that funnily enough one of the spectators requested with heated energy many times “We want Miles." Marcus made more happy ones coming back to stage for another set to play “Blast." His last word were “A la prochaine, Casablanca."