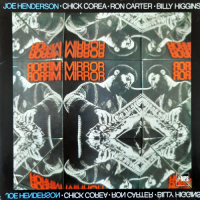 slideshow
Largely forgotten today is Joe Henderson, and I'm not quite sure why. Perhaps it's because the tenor saxophonist made his mark in the 1960s, when fewer jazz fans were paying close attention. Or maybe it was because most of his best albums during the period were sideman dates. Or it could be that Wayne Shorter and John Coltrane were so dominant that there was little limelight left. Whatever the reason, Henderson deserves far more attention than he has received in recent years.

Henderson made his mark recording nearly 30 albums as a sideman and leader for Blue Note between 1963 and '68. These included leadership classics such as Page One, Our Thing, In 'N' Out and Mode for Joe. Now, Edel Germany GmbH has re-issued as a download Henderson's only studio recording for MPS—Mirror, Mirror. Recorded in January 1980, the album featured Joe Henderson (ts), Chick Corea (p), Ron Carter (b) and Billy Higgins (d).

There's something for everyone on this album. The title track by Chick is a lilting waltz, Ron's Candlelight is a deeply felt ballad and the bassist's Keystone has Thelonious Monk touches. Henderson's Joe's Bolero is a free-jazz opus that shows off Henderson's modal chops, the standard What's New? features a walking bass line tempo, while Chick's Blues for Liebestraum is perhaps the album's finest track, with Henderson's cappuccino-rich tones and low-register lines fill the ear but never crowding it. Chick is superb throughout the album, as are Ron and Higgins.

If you're unfamiliar with Henderson, start with Una Mas, trumpeter Kenny Dorham's superb Blue Note album from 1963. Then dig into Henderson's leadership dates for the label.

As for Henderson's sideman sessions, he appears on many of the most important jazz albums of the 1960s. He's on Grant Green's Idle Moments, Lee Morgan's The Sidewinder, Andrew Hill's Point of Departure, Horace Silver's Song for My Father, Larry Young's Unity, Bobby Hutcherson's Stick Up!, McCoy Tyner's The Real McCoy, Freddie Hubbard's Red Clay and Woody Shaw's Rosewood.