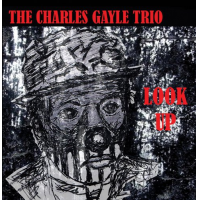 Once commonly disparaged as “the devil’s music”, jazz’s spiritual nature has come to be widely recognized as an important component of the most creative art form. While the music’s link to traditional religious song – that is, gospel music – has been artfully captured in masterpieces such as Duke Ellington’s Sacred Concert and Mary Lou William’s Mass and continues to be explored in the work of church raised musicians such as Eric Reed and Cyrus Chestnut, the less musically obvious relationship between spirituality and “avant-garde jazz” in the tradition of John Coltrane’s A Love Supreme and Albert Ayler’s Spirits Rejoice remains a paramount source of inspiration for much freely improvised music.

Within the lineage of saxophonists connected to the music of Trane and Ayler, no artist has been more candid than Charles Gayle in citing his own deeply held religious beliefs as the source of his creative expression. He notes the title Look Up refers to the heavenly source of his motivation to make music. “To me it’s basically all from the spirit. It all relates somehow to the Lord; that is the genesis of all of it, in my mind and in my heart,” he confesses. “Now I won’t say that it sounds like that to anybody else. But that is really the genesis of all of it, I would say, no matter what it sounds like; it is all dedicated to God.” Hearing Gayle speak these words, one can only be struck by the contrast between serene peacefulness in his voice and the inexorable force of music.

Gayle’s music – which has been described as “angry and confrontational” – is certainly powerful and at times unrelenting. Surely, it can be unsettling to those unaccustomed to the type of energy generated by his improvisations. Yet, there is something unmistakably human in his expression that tells the story of a man who truly has love in his heart. His often told history of living and playing on the streets of New York has left with remarkable compassion for his fellow man. Speaking of those troubled days he says, “During that time I did treat people, no matter what – and people did say things against me – with kindness. I grew more in the knowledge of the Bible when I was going through a lot of things and that even helped me grow more in kindness with people. It was cold (he laughs), but I never blamed anybody. I just went through it and I’m thankful for that. And I grew even more in love with people during that time. I slept on these streets and nobody stole my horn, so that’s one good thing.”

“New York is a different…it will let you know who you are, that’s for sure,” the saxophonist continues. One thing it let him know about himself is that his music could reach people. His “discovery” in the late eighties on the streets off the Lower East Side and subsequent gigs and recordings helped fuel a resurgent interest in the type of music pioneered by artists who were documented on ESP-Disk’ decades earlier. Work with icons such as Sunny Murray, Milford Graves, and Cecil Taylor exposed his sound to an ever-widening audience. The music heard here, recorded in Santa Barbara in 1994, finds him performing before an appreciative crowd making potent music in what he describes as his “energetic” or “power playing” period.

This was Gayle’s first tour of the U.S. West Coast, and he was admittedly inspired by the reception he received. “It was always packed with a lot of people, who I was really surprised about –and very enthusiastic, open, very open,” he declares. “I didn’t even understand that anybody would even show up for gigs at that point, so I was always surprised that people came; but they did. That encourages you so much, to go on and give your best. Hopefully give your best. You want to play forever.” These days Gayle is known for playing more compact improvisations; shorter songs with terser solos. But here we hear him exhibiting the full “Gayle Force” that first brought him international attention. Joined by Michael Wimberly, his regular New York drummer of the period, and Seattle-based bassist Michael Bisio, whose experience with the likes of Sonny Simmons and Joe McPhee made him a wise choice for Gayle’s West Coast excursion, the trio is captured making high energy music that can touch the souls of those with open minds and ears.

Developed, as any true artist’s should. “The music, I think it’s changed. I hope it did,” he says. “The songs are not so long now…The approach to the music, as far as what it sounds like, I think I’ve changed a lot, meaning that it’s not just all based on energy and that kind of thing, which I still love to do even now. I think I’m now using more what they would call just general techniques, as opposed to what they call the energy and the power playing.” The energetic, power playing by Gayle on this recording is an important part of his musical development, a key to understanding the music he is making today, as well as the music of the many younger artists who have been inspired by his honesty and strength. Listened to carefully with an open mind and heart, it just may prompt even the nonbeliever to look up.