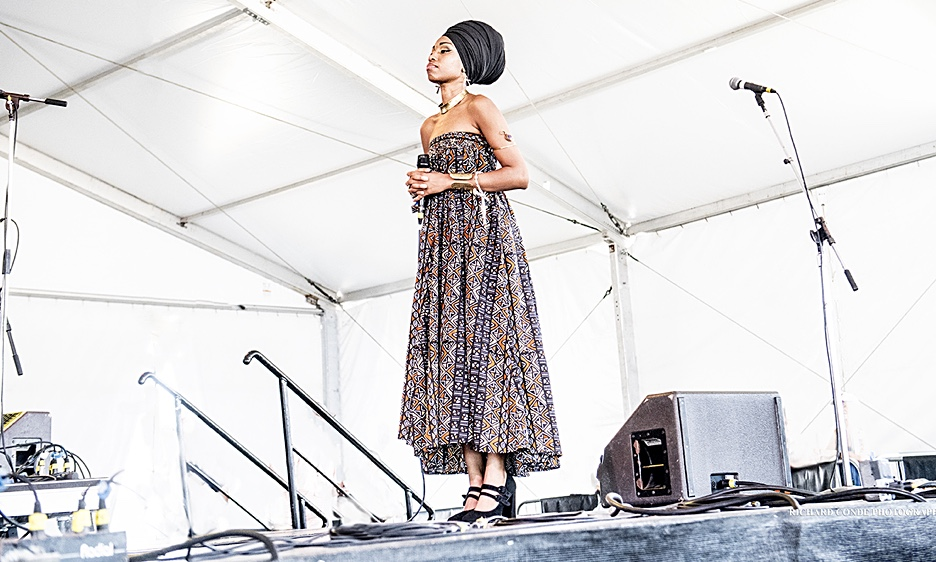 From the first spongy thwack that bounced off the conga drum, a sticky humidity clung about Narragansett peninsula while the sounds of Herlin Riley's New York Havana Connection oozed from the stage. The set featured numerous pieces from New Directions (Mack Avenue Records, 2016), and saw varying tempo changes and multi-rhythmic cycles spark the synergy among band members that inspire musical improvisation.

"This is our version of 'Night in Tunisia,'" Riley said to the audience. He described Dizzy Gillespie as one of the masters of the music, and the band performed a compelling version of the well-known song that explored heavy rhythms.

On "New Direction," a slow moving piece and the title track from the album, Marcus Strickland's bass clarinet brushed in wide strokes, and painted picturesque scenes. "Shake off the Dust" offered expressive lines of horn-inspired soul while the set closed with the danceable sing-along "Tutti Ma."

The Massachusetts Music Educators Association (MEMA), under the direction of Darcy James Argue, consisted of an 18-piece band. Comprised of high school students and recent graduates, they performed a mix of original compositions and covers.

Breezy horns moved in waves, repeating like a pendulum, on "Arrival of the Pegasus." Anchored by electric bass the song twisted and floated with textural enhancements from the vibraphone.

"It's such a pleasure to make music with these young musicians," Argue said to the audience, before queuing the band for Duke Ellington's "Sepia Panorama." Muted horns puffed and swooped, filling the air, and the crowd cheered as Ryan Park bent and sheared notes on a tenor sax solo.

The music raced and swerved on Argue's "Fung Wah Ride," an original composition inspired by a bus line notorious for breakdowns. The climbing sounds and cataclysmic curves abruptly ended on a symphonic two-note punch, emblematic of a crash.

Jazzmeia Horn fronted a trio of intricate interplay, fueled by horn-like singing and scat vocals, all wrapped around messages of social issues in a way that's so beautiful it's easy to miss the seriousness of the message. Clear, crisp vocals moved with the music, rising and crashing with an energetic motion that smashed with the force of a blacksmith's hammer.

The swinging and emotional performance ended with a standing ovation. "You may be seated," Horn instructed the audience, beginning a gospel-infused version of Art Blakey's "Moanin'" to close the set that featured music from A Social Call (Prestige Records, 2017).

"Newport, yeah man, you made my dream come true today," Horn told the crowd. "Seriously, I've dreamed of this day."

Foraging sounds from varied sources, including electronica, jazz, and hints of classical, Go Go Penguin brought a fresh interpretation to the trio format of bass, drum, and piano. Their lengthy explorations comprised of circular movements, variations on melodic ideas, and reintroductions of main themes. Melding cooler tones with electronic effects and elements of rock music, the band blurred genres on songs such as "All Res," "Unspeakable World," and "One Percent."

The sound check for the James Carter Organ Trio was as much a part of the actual performance as the ensuing set itself. Who knew a sound check could be so much fun?

Wearing a peach colored suit, Carter danced to the swirling sounds of Gerard Gibbs's Hammond organ, filling the performance tent inside the stone walls of Fort Adams with voluminous sound, and raising cheers from the crowd. "Love the crowd," Carter said with a laugh, his charismatic presence emitting from the stage.

Gibbs walked a bass line on the low end of the organ. Carter leaned way off the stage, to hear the sounds just like the audience would. "Yeah, that's close enough," he said with a nod and a smile. As he did, the audience playfully taunted and jeered. "Newport, back up in the fort, how ya'll be?" Carter countered the audience's banter. "It's always wonderful to be saturated by ya'll presence."

Carter dedicated the performance to Hamiet Bluiett, a member of the World Saxophone Quartet recovering from a stroke. "That's one of my musical dads," he explained.

The trio of musicians shared a form of musical kinship on a set that explored the music of Django Reinhardt, including: "Manoir de Mes Reves," "Melodie au Crepuscule," and "Anouman." Rooted in blues, washed in the ornamentation and rhythmic variations of gypsy sounds, Carter laid the pipe to it amidst the complex workings of Gibbs's organ and Alex White's drums.

The high-energy set garnered audience reaction and applause throughout the performance, prodding the musicians, and creating a shared experience. The music walked, looped, and soared, while Carter swayed and danced onstage through most of the performance between bursts on his buzzing horn.

"Hang on to your heinies," Christian McBride cautioned the audience while introducing the festival's closing act, George Clinton & Parliament Funkadelic. Thick grooves, slower in tempo, but always funky, had the crowd jumping and waving their arms on P-Funk classics including: "Flashlight," "Give up the Funk," and "Atomic Dog."

The 2018 installment of the Newport Jazz Festival presented by Natixis Investment Managers, with its vast medley of sounds of styles, offered something for every musical taste and preference. We can only wonder about the musical palette next year's festival brings to the shores of Narragansett Bay. See you next time, Newport!