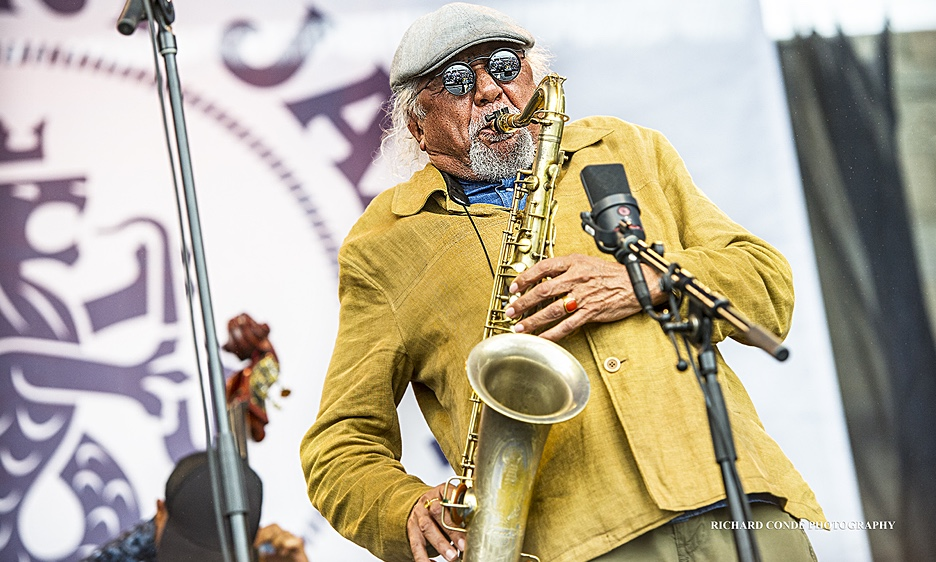 Raw, windswept notes comprised the abstract musical sketches that played beneath a darkening sky to open the 64th edition of the Newport Jazz Festival, presented by Natixis Investment Managers. With flashing fingers, Reggie Workman raked the strings of an upright bass, strumming chords that sang with percussive aggression. Sharp and biting, single notes rang on Oliver Lake's saxophone as Trio 3 played "Amereen." Through a series of loose progressions, the music morphed, and weaved Middle Eastern sounds into its texture.

"We've been together for many years and we've really gotten to know one another," Workman explained of the group's performance rooted in improvisation. "We've got this dialed up on the bandstand. We can deal with what's written, but each member will be there in a unique way, and a fresh way, while still respecting what was originally written."

Workman's "Synapse II," which continued the use of minimalist ideas and a spacious approaches to sounds, saw the band veer in extensive directions, then close as they briefly harmonized on the main theme.

"Musically, if somebody falls, I pick them up, and they do the same for me," Workman said. "Each member brings something while honoring the idea of the music. That's what I feel about this group, mostly because we've been together such a long time."

Commissioned to write a piece by the Newport Jazz Festival, the artists crafted "Newport Suite," a medley of sounds that hinted towards prior jazz masters. "Newport is one of the oldest venues, and it attracts a large audience," Workman said. "The audience here is similar to North Sea, a real dedicated audience. Nowhere else can we go play this music at 11 o'clock in the morning, when it's raining, and have an audience. I'm very happy to be here at this very moment."

"Willow Song" saw Workman recite a passage from Shakespeare's Othello, but this represents just one of the bassist's forays into theatrical music. He collaborated with Maya Milenovic to compose a score for the drama "Das Worlds," presented at Trinity Church in New York. After 30 years of teaching at the New School of Music, Workman is planning to take his first Sabbatical, and will be heading to Slovenia to explore new ideas.

Trio 3's set closed with "Andrew Cyrille's stirring drum work. "As some of you may have realized, that was a tribute to Art Blakey," Andrew Lake said the audience.

Modern, fresh, and energetic, "Unchain My Heart" opened Grace Kelly's set on a performance that bent genres and spanned jazz traditions. Singing vocals, Kelly provided a tribute to Duke Ellington on "It Don't Mean a Thing." With poise and charisma, she tastefully sang praise to legendary Newport performers, the audience that braved the rain, the sound crew, Christian McBride, and festival founder George Wein.

Slick, and upbeat, electronic infused keys and saxophone lines fought in tandem as the band ladled out funk on "Wonder Woman" —a piece Kelly wrote just because she thought all the female superheroes in movies needed a cool soundtrack. The set also contained "Trying to Figure it Out," a slow ballad Kelly wrote after an inspirational conversation with her mother, and closed with Kelly's creative take of "Billie Jean."

"Cosia #6" began as a low guitar note rang out, followed by the warmth of chords. Soft and passionate, Cohen's clarinet provided accompaniment on the wet, misty day. Light and airy, the music had a happy feel. The rhythmic tempos of "Outra Coisa" and "Paula e Betto" encouraged one couple, each wearing plastic ponchos, to dance among the raindrops—nothing but smiles.

The musicians exhibited a form of a natural communication, flowing and rubbery. The jaunty swing on "Nu Blues" offered glimmers of Thelonious Monk. Lloyd played flute on "Booker's Garden," a storied telling of sounds where percussive approaches to instruments spoke through melody.

The slow ballad "Rabo de Nube," a piece of music associated with the Cuban musician Silvio Rodriguez, featured Lloyd's tenor saxophone. Buzzing rain and the drone of a boat horn in the harbor somehow found a home on the emotional weather storm of sound that translates to "Cloud Tail."

Shattering boundaries, the music of Laurie Anderson and Christian McBride was live improvisational art. Broad motions and creative intuition forged musical pathways on an avant-garde set organized around hidden patterns that lacked obvious structural forms. At one point, Anderson encouraged the crowd to scream while the band played with a dark and chaotic fury. As eerie sounds climbed in chromatic ascension, the rain let up, and the sky transformed from dark blotted gray. Sunlight penetrated the clouds, and washed the stage with streaks of light that increased in brightness throughout the remainder of the performance.

In a traditional quartet setting, pianist Harold Mabern and tenor saxophonist Eric Alexander led a burning set of bop-oriented ideas that was a befitting way to close the day. Tangible forms and rapid chord changes forged the conduit for spirited solos on "How insensitive," "Something's Gotta Give," and "Stan's Shovel." The slow ballad "She's Out Of My Life" offered gentle, lyrical melodies of easygoing sounds to round out a set of clean playing and tight rhythms.

Rain and music, sounds and happiness. That was the Saturday installment of the 2018 Newport Jazz Festival.