By Anya Wassenberg
September 3, 2018
Sign in to view read count 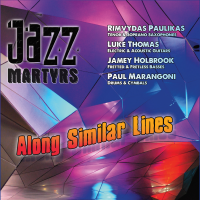 On Along Similar Lines. So-Cal-based drummer and bandleader Paul Marangoni and a band of veteran musicians offer a tight blend of musicianship, and a high-energy approach that shifts tempos and moods easily. The recording has a nice, fat sound, and production values that capture the music with a sense of the live energy between the players.

Marangoni started the band in 2011, and he contributed two original pieces to this release. One of them, "Prava," is a track that is brash and melodic; fluid sax lines from Rimvydas Paulikas are in the spotlight, with a growly guitar solo from Luke Thomas to contrast its smooth tones. "Black Creek," the other original track, revolves around a bouncy bass riff that flows through intriguing chord changes, allowing each instrument its turn to embellish.

The band has chosen an eclectic set of tunes to cover, including a grooved, syncopated version of Jimmy Webb's classic "Wichita Lineman," and a couple of McCartney/Lennon tunes, "I Will" and "She's Leaving Home."

"Skating," by Vince Guaraldi, is the familiar theme from "A Boy Named Charlie Brown," with a beefed-up rhythmic pulse, and a whirlwind of electric guitar and sax. Bassist Jamey Holbrook gets a chance to shine on "Echoes," not surprisingly written by fellow bassist Ron Carter. He makes the complex music sound effortless.

On the band's website, Marangoni cites Pat Metheny as one of his inspirations, and the band cover a couple of Metheny compositions on the album. The ensemble has a clear affinity for the kinetic, hyperactive "Say The Brother's Name;" they handle the more sinuous harmonic and rhythmic changes of "Just Like The Day" with equal aplomb.

The ensemble prove they can also turn down the dial on "After 6," by Austrian jazz guitarist Wolfgang Muthspiel, with its more laid-back groove, and impressive guitar riffs that go from smooth and melodic to an edgy snarl.

A live-on-the-floor energy and the band's versatility create a release with a lot of replay value.