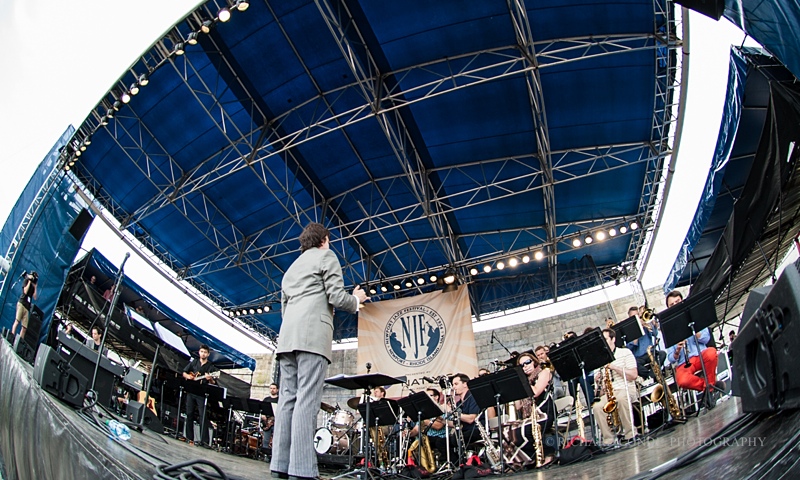 The saxophone reed squealed, as David Sanchez tastefully demonstrated mastery of jazz, but with dark clouds looming on the horizon, music wasn't the only thing on the minds of the patrons at the 60th Newport Jazz Festival presented by Natixis Global Asset Management. On a sticky and hazy morning, Sanchez opened the main stage with the expressive and appropriately titled "Morning Mist." On an intriguing set of original music, the sextet explored deep grooves and emotional solos on pieces such as "The Forgotten Ones" and "A Thousand Yesterdays."

At the Harbor Stage, bassist Sam Kurzontkowski walked a heated bass line that steered over a dozen vivacious horns from the University of Rhode Island Big Band through Buddy Rich's "Groovin Hard." The group performed "The Way You Look Tonight," which showcased Bianca Sperduti on vocals, and Duke Ellington's "Rockin In Rhyme," which included Tyler Barbosa's trombone solo.

URI bandleader Jared Sims pointed out that trumpet professor Mark Berney was sitting in for one student who could not make the event. "We'll cheer real loud for Will Chilton who is in Basic Training and serving his country," Sims said to a round of applause.

"This is the second year we've been here at Newport, and we're proud to be part of the celebration," Sims said. "The 60th anniversary is a reference to the traditions of this music, and it's a tradition that really matters to us. We're one of the few universities in Rhode Island with a jazz program, so for us to be here is special."

Each July, Sims and his colleagues at URI host jazz camps for interested students. Several musicians who performed as part of the URI Big Band were former participants in the summer jazz camp program.

Turning the idea of what a big band can sound like on its head, Darcy James Argue's Secret Society performed extensive charts with complicated twists on a masterful set of truly modern music. They opened with "Ferromagnetic," a brooding piece that was partially inspired by the controversial Blackwater Security incident that resulted in the deaths of 17 Iraqi civilians. "Code Breaker" was a tribute to Alan Turing, the father of modern computer science who cracked the German U-Boat codes, altering events of WWII in favor of the Allied Powers.

Rudresh Mahanthappa offered up an electrifying set the provided modern interpretations on some of Charlie Parker's concepts and ideas. Mahanthappa's alto saxophone snaked the melody line to "On the D.L," the opening number to a set that also included "Gopuram" and "Maybe Later," among others.

With short-cropped hair, wide-rimmed glasses, and a dazzling set of pipes, Cecile McLorin Salvant, the day's only matron of the music delivered a set that showcased her vocal prowess, while still providing plenty of space for her backing trio to have a say. From the first note Cecile sang atop Paul Sikivie's bouncy bass riff on "Woman Child," the band's musical rhythms and Cecile's harmonic phrasings intertwined in a dance that continually changed pace. The throwback "Nobody" featured pianist Aaron Diehl's accompaniment, while hints of grit were heard on the bluesy "Growlin." The set closed with the encore "I Didn't Know What Time It Was."

Vince Giordano and the Nighthawks provided additional Big Band sounds, with a performance that contained salutes to Fletcher Henderson and Joe King Oliver. The set opened with "Stingray," which was followed by "Copenhagen," an early Fletcher Henderson piece, "from around the time Louis Armstrong joined the band," Giordano explained.

Amid the eleven piece band, Giordano could easily be spotted, brandishing his trademark bass. "It's an Aluminum bass made in the late 1920s or early 30s," Giordano said. "These types of instruments were mass produced by two companies. One was Conn, but I think mine is from Germany. It was a cheaper way to manufacture a bass during the great depression, and they traveled well for the time period."

King Oliver's bluesy "Sweet Like This" sported a pair of trumpet solos by Michael Ponella and Bria Skonberg. "Sugarfoot Stomp," which Giordano described as an augmentation of "Dipper Mouth Blues" hinted at classic New Orleans and garnered audience cheers.

"It's a great honor for us [to perform here], and a real tribute to George Wein, whose belief in jazz has never faltered," Giordano said. "The number of musicians he's had perform, and number of people he's singlehandedly made, is just amazing."

Continuing, Giordano explained, "When I was a younger man, I went to the New York Jazz Repertory Company," an attempt by Wein to bring jazz sounds to Carnegie Hall. "They would perform Bix Beiderbecke, early Ellington, Kansas City Bands, and Jelly Roll Morton. That was actually one of the main influences on me starting the Nighthawks, so George Wein is also partially responsible for that."

Giordano's anecdotes between selections equated to brief documentaries about the people and recordings from jazz's early days. Those who are thirsty for such knowledge can find Giordano at his ongoing Monday and Tuesday night stints at Iguana in NYC.

Trumpeter Amir ElSaffar led a quintet on a set that made for one of the most engaging performances of the day. On songs such as "Ishtarum," "12 Cycles, and "Athar Kurd," ElSaffar mixed Babylonian modal music with microtonal pitches. During the performance, ElSaffar explained that an ancient tablet depicts the use of the seven modes of music as far back as the Babylonian and Sumerian cultures—establishing a much earlier timeline for their use than was previously thought. "The composer Lou Harrison did some work on this in the 1970s. Part of how I discovered it was through a lecture he gave," ElSaffar explained.

Bringing things back to the present, and winding down the first day of the festival, Snarky Puppy's electronic undulations on "What About Us," "Lingus," and "Shofukan" had the crowd shaking and dancing.

While the futuristic sounds and forward-looking visions of the festival are important, so too were the efforts documenting the richness of the music's past. "Right now I'm very happy because we have all these new faces," said festival founder George Wein. "I'm very pleased—it gives me hope for keeping this festival what I want, and that's jazz," he said with a smile.

Newport may have turned 60, but she certainly isn't showing any signs of aging.