Rodney Whitaker: When We Find Ourselves Alone

By Dan Bilawsky
August 7, 2014
Sign in to view read count 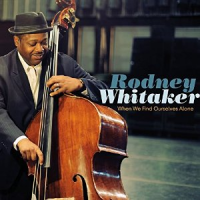 Bassist Rodney Whitaker is often cited for his affiliations rather than his own work. That's a shame, as it takes attention away from some wonderful music that he's put out under his own name, but it's easy to understand why that's the case. He anchored trumpeter Roy Hargrove's band for a while, ballasted and buoyed Wynton Marsalis's Jazz at Lincoln Center Orchestra during his stint with that acclaimed organization, and connected with drummer Carl Allen for a pair of exciting dates on the Mack Avenue imprint. He also directs that label's "Superband" and contributes to the future of the music through his educational work as a Distinguished Professor of Jazz Bass at Michigan State University. Add to that a list of recording credits that finds him supporting everybody from vocal breakout star Cecile McLorin Salvant to under-recognized pianist Junko Onishi and you start to realize why Whitaker's name is often spoken in the same breath as those he works with and supports. Here, all of that known-by-association nonsense falls away.

When We Find Ourselves Alone presents Rodney Whitaker in all his glory, playing exactly what he wants to play. He doesn't share billing or serve somebody else's vision. Instead, he pulls from various places and interests to create a straightforward yet diverse program with some help from some old friends. Whitaker's joined by pianist Bruce Barth, an associate from his days with trumpeter Terence Blanchard, and two of his comrades-in-arms from his time with Hargrove—saxophonist Antonio Hart and drummer Gregory Hutchinson. All four men gel beautifully and seem to have a ball walking down different musical avenues together.

The album starts off with "The World Falls Away," a swinging number that gives everybody a chance to solo, but the band immediately switches gears on the follow-up song—the Brazilian-tinged, Hargrove-referencing "When You Played With Roy." As things progress, lots of other approaches are utilized. Pure beauty comes to the fore as Hart's poignant soprano steers the proceedings during "Jamerson's Lullaby"; drive and intensity are at the heart of "Freedom Day"; soul jazz makes an appearance via "Mr. Magic"; and "You Go To My Head" is reconfigured as a funk-inflected, backbeat-driven number. Whitaker's daughter—vocalist Rockelle Fortin—also brings some different things to the table. Her first appearance finds her working with her father's arco support at the dawn of "Autumn Leaves"; the piece later moves into a swinging environment with Fortin scatting away. She also enlivens "Freedom Day" and "You Go To My Head," brings a dash of sly sophistication to "Mr. Magic," and merges with Hart's uplifting saxophone on the hopeful, album-ending "Lost In You Again."

When We Find Ourselves Alone projects solitude through its name, but the music contained herein does the exact opposite. A sense of togetherness and camaraderie shines through here.

The World Falls Away; When You Played With Roy; Autumn Leaves; Jamerson's Lullaby; You Go To My Head; Invitation; Freedom Day; A Mother's Cry; Mr. Magic; When We Find Ourselves Alone; Lost In You Again.